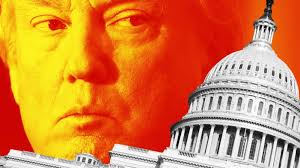 The die is cast. Robert Mueller’s first public statement since the release of his report is possibly also his last. The document, he said this week, “speaks for itself.”

The special counsel seems nonetheless to have been trying to establish in his remarks that one thing is clear: no, Donald Trump has not been exonerated from all blame.

Exoneration is what the president and his acolytes have tried to get people to believe ever since the report was submitted to Attorney General William Barr in March. It is just another of the Trump clan’s tricks.

Robert Mueller’s conclusions on the matter can be summed up easily. If Trump has not been charged with obstruction of justice, that is because the special counsel followed the Justice Department’s policy that no sitting president can be indicted. Period!

Mueller, by the way, was keen to explain something that was written in black and white in his report but that had not, up until now, had enough of an impact: if he had believed that Donald Trump did not commit a crime, he would have made it known explicitly.

And what can be said about the pressure Trump put on former FBI Director James Comey, whom he ended up firing? Or his lies about his ties to Russia?

That being said, according to the special counsel’s controversial and contested opinion, there is one single way to judge a president, and that is through impeachment proceedings.

Legal experts do not all have the same opinion on the matter. But the fact remains that, from here on out, their opinions do not matter much. We cannot go back. The ball is now in the Democrats’ court. More precisely, it is in the court of House Democrats, where impeachment proceedings begin.

That is not just the logical consequence of the process that was launched two years ago when the attorney general named a special counsel, but it is also what the Constitution dictates. There, it is clearly explained that a president “shall be removed from office on impeachment for, and conviction of, treason, bribery, or other high crimes and misdemeanors.”

The problem – and it is sizeable – is that impeachment carries the risk of having the opposite effect of what its proponents are counting on.

First, this political solution would not pave the way for Trump’s removal, because in the end, it is the Senate that must judge whether or not the president is guilty, and the Republicans are the ones who control the Senate. They are not going to shoot themselves in the foot.

Furthermore, it is almost certain that Trump would be able to portray himself as a victim and turn the situation to his advantage. That means that trying to impeach the president could … help him get reelected more easily.

The Republican Party would even have a better chance of regaining control of the House in the next election, because it is a good bet that some voters would punish the Democrats for having started a political crisis of this sort.

In a certain way, it is not the president who is caught in a trap with the release of the Mueller report, but the Democrats. It is a sad paradox.