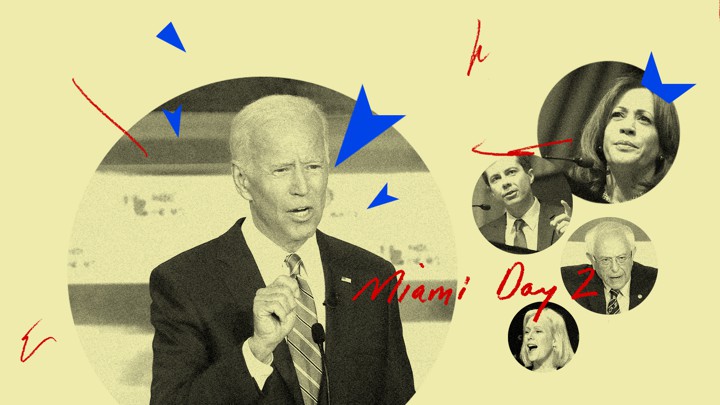 During the two Democratic debates, Biden's rich past turned out to be a burden. And virtually everyone has moved to the left.

Even before the poll results for the two Democratic debates were in on Friday, analysts agreed about Thursday night. The front-runner Joe Biden had not done himself any favors with his performance. During the second debate on Thursday, the former vice-president had the longest speaking time in a field of 10 Democratic presidential candidates, but he also suffered the largest number of attacks, and he did not pull those off well.

Biden, elected to the Senate from Delaware in 1973, carries with him the full weight of a long political career. He tries to present that as an advantage in his campaign. During Thursday’s debate, he repeatedly cited past achievements, especially during his term as Barack Obama's vice-president. But his opponents find equally usable ammunition in Biden’s resume for their attacks. When Biden took credit for a tax increase that even the Republicans approved, Sen. Michael Bennet from Colorado interrupted. "The deal [with Mitch McConnell] was a complete victory for the tea party,” (the ultraconservative wing of the Republican Party at the time) Bennet said. "That was […] a terrible deal for America.”

The highly personal attack of Sen. Kamala Harris from California seemed to particularly throw Biden off balance. She asked him why he had praised the “civility” of two former senators last week, when they were open proponents of segregation at the time. She asked Biden whether he regretted voting with them against a federal law that bused black children to schools in better neighborhoods. Biden denied, stumbled and ended with a hopeful look at the clock. "My time's up, I'm sorry," he said. Almost every media outlet declared Harris the winner in Thursday night’s debate.

In general, the second night of the live debates brought more fire than the first. On both nights, candidates addressed complicated political issues such as immigration, the economy, health care, gun control, foreign policy and the climate in rapid succession. President Donald Trump, en route to the Group of 20 summit of industrial and emerging-market nations being held in Japan, could not resist tweeting "BORING," from abroad during the first debate.

All 20 Democrats who joined the two debates may disagree on many points, but almost all have moved to the left compared to the last two Democratic presidents, Bill Clinton and Obama. Even Pete Buttigieg, mayor of South Bend, Indiana, was firmly positioned to the left. Buttigieg He made an impression when he acknowledged that he has been unable to prevent police violence against black citizens in his city. In response to the mediator’s question Thursday about who would provide health care for immigrants in the U.S. without documentation, all 10 Democrats raised their hand, including the moderate John Hickenlooper and Bennet.

Bernie Sanders, who made a name for himself in 2016 during the duel with Hillary Clinton, is still the most outspokenly leftist candidate, demanding that the federal government play a larger role large and calling for a massive redistribution of national wealth. But he is now joined by fellow senators like Harris, Elizabeth Warren, Kirstin Gillibrand and Cory Booker. On Wednesday, for the first time, Warren embraced Sanders's plan for national, government-regulated health insurance, which will replace commercial health care providers. On the first night of the debates, the business community was the big enemy, especially health care providers and the pharmaceutical industry.

The one person who was barely mentioned on either night was President Trump. Some candidates, when asked, spoke of him as "the biggest threat to the U.S." But Biden was the only major candidate to systematically attack the president, beginning the answer to the first question with "Donald Trump thinks […]"and ending his remarks by saying that this president has “ripped out” the soul of this nation. The tactic seemed clear. Biden is trying to start a fight with Trump above the heads of the other candidates. However, those candidates firmly made their marks on Thursday.