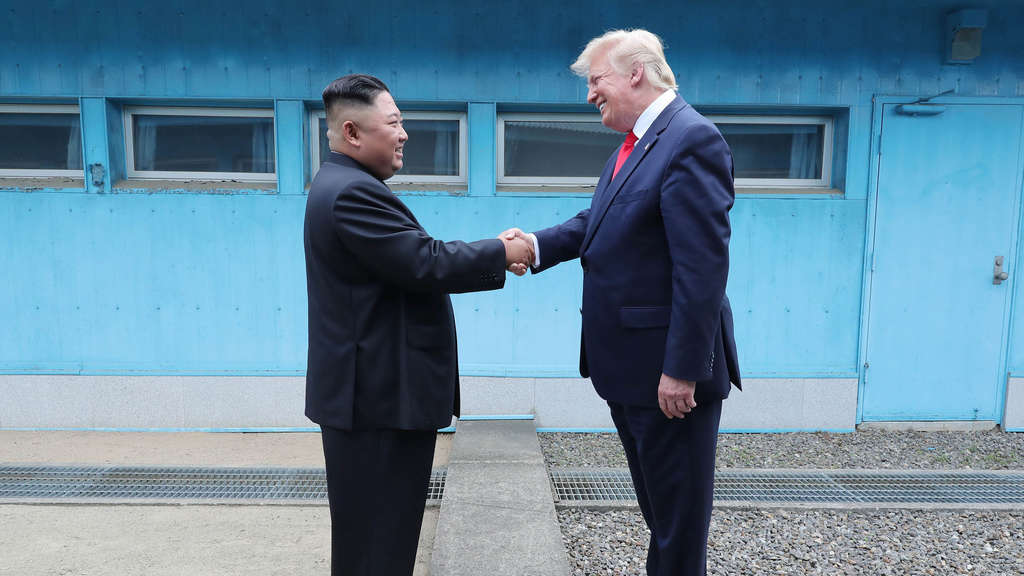 By meeting with the North Korean dictator, President Trump has generated a lot of attention but no progress in that country’s denuclearization.

Wherever Donald Trump is, a superlative is not far behind. His visit to North Korea was a “great day for the world,” as he made known. He had announced the special program event the day before on Twitter, and in fact, everything seemed to come together in a rather unplanned way. The big show in the border zone clearly will not bring peace or a North Korea that is free of nuclear weapons long-term; this day will soon shrink to its normal size. But it is worth taking a closer look at this weekend’s events.

One could see in their latest meeting how quickly Trump and Kim Jong Un’s apparent friendship has its limits. When they were seriously negotiating North Korea’s denuclearization in Vietnam earlier this year, the talks fell apart early and badly. Trump’s trash diplomacy had reached its limits. Details are not his thing; the discussions lacked in substance, preparation and patience. Since then: silence.

Donald Trump Is Not Even a Hawk

Trump probably does not care. The peace talks with North Korea, if one even wants to use that weighty term, are the president’s diplomatic fig leaf. In this case, Trump is not even a hawk; his foreign policy doctrine is disinterest. But radical voices in his administration and in Congress are driving him toward confrontation over the Iran question, the consequences of which he probably only partially grasps.

The irrational rapprochement with the North Korean dictator, who not so long ago tortured American student Otto Warmbier to death over a stolen poster, is supposed to display the other Trump: Look, I can do peace, too.

At the same time, the U.S. president wanted to prove yet again with his visit how much he ascribes to old diplomatic models. Trump traveled directly from the Group of 20 summit in Japan to Korea. He has no respect for the deliberate negotiation style of the 20 most powerful countries and regions of the world, their communiqués and expressions.

It does not fit his personality, but Trump would also just rather play alone. His motto: as long as the United States is the most powerful country on earth, cooperation just disrupts the power structure. He forges his own path. And summits so rarely revolve around the mood of a single person, as in Trump’s case. The talent show plan is working.

The G-20 summit should be a cause for reflection for the Europeans in particular. Although this summit actually turned out better than expected in reaching certain resolutions, including those on environmental, trade and steel policies, the format itself should be reconsidered.

Europe Too Often Stands There With No Answer

It makes no sense to discuss climate issues with President Trump, similarly and even less so for Saudi Arabia’s Crown Prince Mohammed bin Salman, who does not even deserve the honor of sitting at the same table with world leaders in such a forum. In the coming year, the crown prince will even host the next G-20 summit, a disturbing prospect.

Europe still believes in the power of slow diplomacy. Indeed, its value as a tool cannot be overstated; it guaranteed peace for many years. But the contexts in which it is applied are increasingly losing power. The United Nations is politically disarmed, the World Trade Organization even more so. The EU is in crisis. Europe, including Germany, should try again to achieve more in bilateral negotiations to become more active and to be able to react more quickly. Because Trump’s heavy-handedness makes him fast, Europe too often stands there with no answer.

A strengthened German-French alliance would be a good response to the games on the other side of the Atlantic. Some foreign policy initiatives, even outside of the traditional paradigms, would be worth a try. There are plenty of fields in which such an initiative is needed. Ukraine, climate policy and military cooperation, to name just a few examples.

Europe is slow. That does not matter in times of peace. But times are becoming more unsettled, and soon we may not be able to afford slow responses to crises.