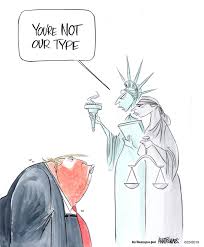 It’s not the first accusation leveled against him. In fact, this is number 16. It certainly won’t be the last, either. What is even more certain is that we know the aggressor’s response will always be the same: denial.

“The moment the dressing room door is closed, he lunges at me, pushes me against the wall, hitting my head quite badly, and puts his mouth against my lips…” writes the columnist E. Jean Carroll in her new book “What Do We Need Men For? A Modest Proposal,” which is just about to go on sale. The man accused is Donald Trump, and the accusations have already provoked a response from within the White House. In the report, the journalist claims that the events took place in a Bergdorf Goodman store sometime in the 1990s and describes the current president pulling down her tights, opening his trousers and penetrating her before she managed to free herself and escape.

It’s not the first accusation leveled against him. In fact, this is number 16. It certainly won’t be the last, either. What is even more certain is that we know the aggressor’s response will always be the same: denial. Although there are also those that, like Trump, go even further and look to rid themselves of all responsibility by not only denying involvement but also discrediting the accuser.

“I’ll say it with great respect: Number one, she’s not my type. Number two, it never happened. It never happened, OK?” exclaimed the president of the United States in an interview with The Hill. No explanation is needed as to what he meant by this. How many times have we heard answers like this in our own close circles?

In response to characters like Trump, we can only applaud actions such as that which took place yesterday at the Ariel Awards ceremony held in Mexico’s National Cinema. Together in this space, we will say it as many times as we need to: We must understand the scale of gender violence and its many different forms. Just as Carroll talks in her book about the aggression she was victim to, an endless number of women actresses, producers, editors and directors working in the film and TV industry in our country are speaking out against gender inequality. An inequality that doesn’t even allow fictional stories told on the big screen to address issues of gender.

Equality is the great pending task of — let’s repeat it — a society that should be doing everything in its reach to fulfill its potential. Fewer Trumps and more women that “aren’t his type,” and raise your voices, please.