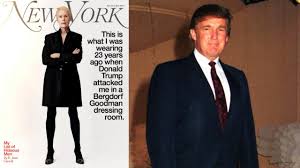 Imagine if Barack Obama had been accused of rape in the middle of his first term; if he had, in short, found himself in a similar situation to that of Donald Trump.

The news would have made the headlines in the major U.S. newspapers, probably for several days, perhaps even for a few weeks. Continuous-news networks such as CNN and Fox News would have made considerable efforts to cover the case from all angles.

The media frenzy would have probably reflected what happened in the late 1990s, when the press reported Bill Clinton’s relationship with a young intern. At the time, some American media outlets even urgently called in journalists who were in Cuba to cover a historic meeting between the Pope and Fidel Castro! The scandal then took center stage for several months.

And what is happening today now that Donald Trump has just been accused of rape by New York columnist E. Jean Carroll? The allegations raised some controversy, but made very few waves.

We talked about the charges, but there was very little response. (Even The New York Times was forced to admit that it had not initially attributed enough importance to the news.) And, in fact, the allegations had very little impact.

This is not trivial. It is a sign, and we are not fooled by it. It signifies that we now find Trump (almost) normal. Never before has it been possible to affirm this so indisputably. The lack of commotion and the tepidness of the outrage since Carroll’s allegations were published cannot be explained any other way.

Of course, Trump is presumed to be innocent. He denies the charges and claims his accuser “is trying to sell a new book,” which may give the impression that she is being self-serving. On the other hand, the allegations have been corroborated by two friends with whom she discussed the alleged rape in the 1990s. And the allegations are consistent with those of other women who say they have been assaulted by someone who was once a powerful and charismatic businessman.

It should be noted that previous allegations, almost all of which were made public toward the end of the 2016 race to the White House, received extensive media coverage. Just like the broadcast of the recording in which Trump is heard insisting that “when you’re a star,” you can grab women “by the pussy.” The outcry was such that his political career almost came to an end.

Carroll’s account is far from having a similar effect. However, of all the women who have accused Trump of sexual assault, and there are approximately 20, none has yet to claim she was raped. The most recent allegations are also the most serious.

To add insult to injury, the president responded that Carroll was “not [his] type.”

These crude remarks were reported, but did not provoke any real controversy. That, too, is surprising, despite the similar comments Trump previously made.

As Trevor Noah, host of the Daily Show, said, “If your denial leaves people thinking there is a type of woman you would rape, that’s not a good denial.”

Imagine if Obama, after having been accused of rape in the middle of his first term, had said that the woman in question was not his type!

Public opinion in the United Stations is now desensitized, like the frog in a pot of cold water who, when the temperature is gradually raised, gets used to the change. Americans have finally adapted.

Not completely, of course. But Trump has succeeded, out of necessity (and because of his communication skills, which allow him to get away with blunders), in changing what Americans expect from their president.

His rudeness, his insolence, his shouting, his obscenities, his contempt, his lies, his half-truths and, yes, his assault no longer shock as much as they did before.

Move along, there’s nothing to see.

And this milestone has been reached while the Democrats are tearing each other apart to determine who, among their countless candidates, will face Trump in November 2020. It seems to suggest that Trump, the Republican candidate, will be even more outspoken than in 2016, because his offenses won’t generate as much indignation. If the trend continues, the Democratic candidate will face a Teflon president to whom no scandal sticks.