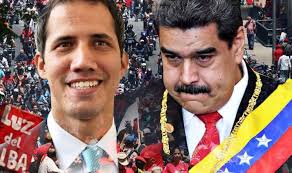 Expert Igor Pshenichnikov of the Russian Institute for Strategic Studies on how the Venezuelan opposition is losing the support of its American trustees.

Metaphorically speaking, the United States government has released the entire Venezuelan opposition and the interim president of the country, Juan Guaidó, into open waters. The opposition is furiously trying to regain the favor of its American supporters and, in order to still appear useful, it has announced another final attack on the legitimate president, Nicolás Maduro. Meanwhile, the U.S. is essentially informing the whole world, and Guaidó himself, that his services are no longer needed.

If we are to believe Guaidó, Venezuela can expect a new round of agitation within the next few days. He sent an emotional video message to the 12th Atlantic Forum, which was recently held in Madrid and comprises liberal academics from various countries. This video message was, presumably, supposed to show the international community that the Venezuelan opposition had not withered in its fruitless attempts to remove Maduro, but is, in fact, taking power into its own hands. Guaidó stated that “the coming days will be crucial” for Venezuela, and that “the international community will play a decisive role in these events.” “We are not giving up, we are pushing on, we have the tools to get out of this dictatorship. We are counting on you,” Guaidó concluded.

Guaidó has already issued many similar statements. Yet, all the opposition’s previous attempts to remove the legitimate head of state have proven unsuccessful. Guaidó’s words resemble a gesture of despair in the hope of retaining his status as interim president.

However, the issue here lies in the fact that a few days ago, U.S. Secretary of State Mike Pompeo announced at a closed meeting with the leaders of Jewish communities in the United States that the opponents of President Nicolás Maduro are highly fractious and that U.S. efforts to keep them together have been more difficult than is publicly known. Pompeo added, “Our conundrum, which is to keep the opposition united, has proven devilishly difficult. The moment Maduro leaves, everybody’s going to raise their hands and [say], ‘Take me, I’m the next president of Venezuela.’ It would be 40-plus people who believe they’re the rightful heir to Maduro.”

Despite the private nature of the discussion, Pompeo’s words were recorded and were mysteriously made available to The Washington Post. It’s hard to imagine that this was a result of negligence on the part of Pompeo, who is extremely careful not to stray from his president when making statements regarding U.S. moves on the international stage. There is no doubt that the speech was approved by Donald Trump, and that its publication was a planned information leak. By doing this, the U.S. has made it clear that its active measures in Venezuela have come to an end. And it is likely that the active phase of U.S. anti-Venezuelan policy has ended prematurely. The recurrent statements from Trump, Pompeo, and other White House spokesmen announcing that “Maduro’s days are numbered” only serve to damage America’s image, as they are playing against a background in which the legitimate president is controlling the situation while Guaidó stalls. All talk and no action. It’s an embarrassment.

What reinforces this message is the fact that following the leak of Pompeo’s “private” statement, an announcement appeared in the Latin American and Spanish press that directly discredits Guaidó and the entire Venezuelan opposition. It was revealed that Guaidó’s comrades stole funds from private donations that were collected as humanitarian aid for Venezuelan refugees in Colombia. The individuals in question are three trustees of the interim president. The names of two of them are known. They are Rossana Barrera and Kevin Rojas, who have, reportedly, spent more than $90,000 on a “sweet life” and buying luxury goods for personal use. Naturally, Guaidó said these individuals have been dismissed from their positions and that there will be a thorough investigation. But the deed is done.

Secretary General of the Organization of American States Luis Almagro has poured fuel on the fire by demanding a thorough investigation into reports of corruption within the Venezuelan opposition.

The U.S. is rejecting its protégé Guaidó and is practically telling the global community that it should not expect any serious action against Venezuela – at least not during Trump’s reelection campaign. A few days ago, Trump himself said in an interview with the Spanish television channel Telemundo that “the political transition to democracy in Venezuela is a process,” making clear that the U.S. will not be making any quick moves with respect to Venezuela. There is no talk of any armed intervention.

But now, it is unclear what those 50 countries that were allied with America and recognized Guaidó as the legitimate president under pressure from Washington will do. We know that many of them are still continuing to explore diplomatic solutions with the legitimate authorities in Venezuela. For them, Guaidó is like an old suitcase without handles: Carrying it is uncomfortable, but throwing it out onto the street would also be wrong. But the White House doesn’t care about this. To them, Guaidó is garbage. And the United States has treated him as such. Let this be a lesson for all future American puppets.