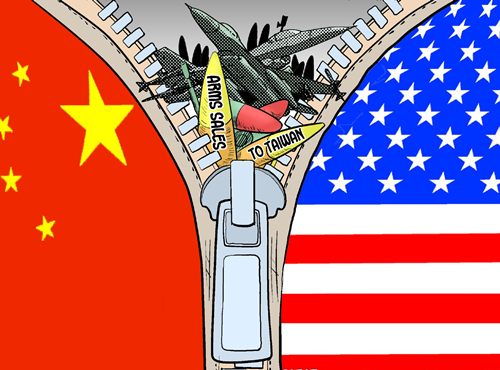 The United States Department of Defense said on Monday, July 8, that the U.S. has approved a total of about $2.2 billion in new arms sales to Taiwan. This sale includes 108 M1A2T Abrams tanks and 250 Stinger portable air defense missiles. The U.S. media reported that this arms sale was implemented in the face of the ongoing trade war between China and the United States.

It now appears that the responsibility for solving the problem of arms sales to Taiwan lies with the mainland for two reasons. First, the mainland's military is becoming more and more powerful, which has led to Taiwan's newly purchased weapons holding less significance. There is no way Taiwan will be able to maintain cross-strait military balance through the purchasing of these weapons. Second, the strengthening of the mainland's military has increased its ability to suppress external arms sales to Taiwan. In the past, France and the Netherlands both sold weapons to Taiwan; now, only the United States is left.

The U.S. has several goals in selling weapons to Taiwan: to make money, maintain the influence of the United States on Taiwan, and contain China. Washington has very clearly shown that these military sales are not intended to support the maintenance of the military balance on both sides of the strait, but this is still the rhetoric used in its Taiwan Relations Act. The focus of U.S. policy has shifted from "defending Taiwan's security" to playing other games with China.

For the Taiwan authorities, keeping the U.S. involved is essential to maintaining the existing cross-strait policy. They are aware that the People's Liberation Army retains an overwhelming advantage over the Taiwanese military. If Taiwan decided to fight for liberation from China, it would be easier for the PLA than the peaceful liberation of Beiping.* The purchase of U.S. armaments has lost its physical significance, but what Taipei wants is to take advantage of the psychological effect; by spending a large chunk of its military budget on U.S. weapons, Taiwan pays protection fees.

U.S. arms sales to Taiwan have been a long-term problem for Sino-U.S. relations, but for the reasons outlined above, this conflict has gradually declined, because the mainland now has more control over the situation in the Taiwan Strait. Though China has always exercised restraint, it has the ability to change the rules of the game.

It is nearly impossible to overstate the relationship between the U.S. and Taiwan, but once it is stretched too far, there will definitely be a price to pay. Let’s take a look at an extreme hypothetical: One day, the United States and Taiwan could make such a large military sale that the mainland does not accept it, and the mainland announces that if that equipment is sent to the island, the PLA will destroy it. What will happen then?

In order to guarantee Taiwan’s safety, it must manage cross-strait relations and avoid a military confrontation with the mainland. As long as the Taiwanese authorities do not pursue independence, conflict can easily be avoided. However, once steps toward Taiwanese independence are taken, it is useless to claim Taiwan is only rejecting mainland martial law. The mainland has always adhered to the policy of peaceful reunification, and Taiwanese authorities should not force the mainland to abandon this policy.

The road that the Democratic Progressive Party is currently on leads only to trouble, lacking strategy and a clear understanding of the overall situation. The DPP broke with history, so they now only have a vague understanding of the law and of the rise and fall of their society. Hopefully, they will not take the final step toward a massive mistake that will eventually ruin them.

*Editor's note: Beiping is a former name of Beijing, which means "Northern Capital". The city was called Beiping from 1368 to 1403 and from 1928 to 1949, when the Chinese capital was at Nanjing. From 1937 to 1945, the city under Japanese occupation served as the capital of a puppet regime and was renamed Beijing but most Chinese histories use the name Beiping for the city during that time period.