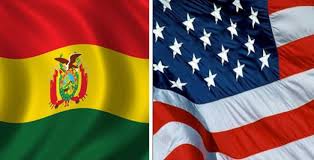 Today, July 4, a day on which the U.S. commemorates the 243rd anniversary of signing the Declaration of Independence, is a timely opportunity to remember that it has been almost 11 years since the Bolivian government decided in September 2008 to sever diplomatic relations.

Since then, relations between both countries have been reduced to the level of a charge d'affaires, representing the U.S., and consular services on the side of Bolivia.

However, this has not prevented commercial relations from remaining fluid. And although there have been areas such as textiles, for which the loss of the U.S. market has had devastating effects, overall, indications are that the U.S. remains one of the principal trading partners of our country. And not only because imports and exports have remained at a high level, but also because they have continued growing at such a pace that they almost tripled during the last decade.

The same can be said about other aspects that define the quality of relations between our two countries. This is the case with academic exchanges and the flow of tourists, which have not deteriorated, but have even maintained a trend of continuous improvement.

All of the above indicates that the only thing Bolivia and the United States need to restore normal relations is a matter of resuming formalities, such as reappointing ambassadors; a formal detail that carries is has more symbolic than practical impact. something that is important for the government of Evo Morales who has made anti-imperialism one of the principal elements of its discursive artillery.

As far as the United States is concerned, there seems to be no great interest in restoring formal diplomatic relations either, even less now when the Trump administration does not even bother to disguise its disdain for Latin America.

Under these circumstances, it is unlikely that the current situation will change in the near future. As we have already seen, it does not affect good bilateral relations in substance or in practice because the rift is limited to empty rhetoric. That is not an insignificant detail because with that attitude, Bolivia remains isolated with only the undesirable company of Venezuela, clinging to an anti-imperialistic discourse that has lost much of its credibility and that at this point in history, only serves to raise doubt about the seriousness of those who raise it.