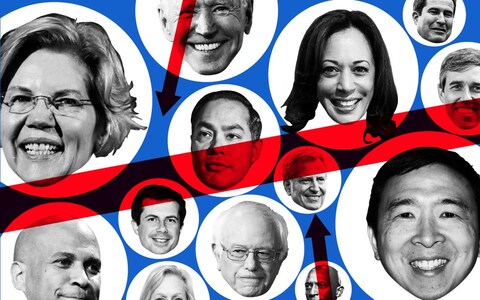 The U.S. election season has started, and it will continue until the first Tuesday in November 2020 when the next president is elected. This time, there will either be a Democratic president, or the current president, Donald Trump, will be granted a second term.

You may think the U.S. election season lasts about a year and a half, but it actually lasts longer than that. Some candidates started campaigning six months ago, while others started running the moment Trump was elected. This stage, however, is considered a warm-up round in which candidates try to get attention.

All U.S. elections are fascinating. Since Trump came onto the political scene, they’ve become even more compelling. If you pay attention, you’ll see why. Trump is an unprecedented figure among U.S. presidents, from George Washington to Barack Obama.

If you care about the U.S. as an important country within the international system, or if you’re concerned about the interests of your own country vis-à-vis the most powerful nation in the world, then you need to study the election road map you’ll be following.

It all starts with a long preseason that comes before the primary elections held by the two major parties, the Republican Party and the Democratic Party. Of course, there are many other parties which range from the fascist far-right to the communist left.

These parties shouldn’t concern you because no president has been elected from them. What should interest you is the battle from now until the start of the primaries, a 50-state process in which the two major parties settle on their nominees for the presidential election.

The nomination isn’t decided by a straight majority. Instead, it’s a decision made by the party committee, which convenes next July and August. When the candidates arrive, there’s usually a front-runner who has won a majority of the primary votes. Each party’s national convention is a ceremonial election whereby delegations from the states cast ballots in accordance with the primary results in their states.

The national conventions take place at a much later stage in the campaign. For the time being, candidates are preparing for the primaries by participating in a series of debates. The Democratic debates have already started. At this point, there are 24 candidates, and each one is trying to prove he or she is the best and most capable of beating the Republican nominee, who is Trump for now.

The incumbent usually has the advantage of avoiding an exhausting primary election. Instead, he typically goes straight to the party convention and spends his campaign season attacking the other party’s candidates as they tear each other apart. That doesn’t mean that victory is guaranteed for the incumbent in the White House. Gerald Ford, Jimmy Carter and George H. W. Bush all lost their reelection bids.

Let’s return to the primary battle, which reveals a candidate’s personality, ideas and ability to address crowds and the media. The party nominee must emerge from this battle having gained respect and public appeal. Moreover, the nominee must appear “presidential” and capable of leading the largest economy and military in the world.

At the end of next January, the primary elections will begin in the states, and candidates will start dropping out. The Iowa caucuses and New Hampshire primary are considered the first round of cuts after which candidates leave the race, one after the other, until the party convention. At that time, there will either be a favorite candidate with a sweeping majority of votes, or a negotiation process will take place between the leading candidate and the rest of the field.

The party convention nominates the presidential and vice-presidential candidates and creates the party platform, a political program that no one ever looks at again, win or lose. Every president set his own agenda.

U.S. elections are an industry full of experts, specialized firms, stylists and speech writers. Then there’s the media, who know how to track public opinion polls, report on political mistakes, and comb through each candidate’s past in search of successes and scandals. As for the rest, we’ll discuss that another time.