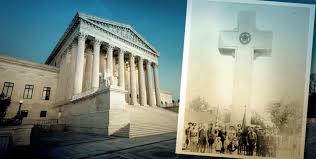 It’s foolish to think that the desecration of sacred objects or the fight against them on the other side of the planet doesn’t concern us. When we’re talking about a fight against Christianity, we, as a country of 1,000 years of Orthodoxy, should understand that the bell tolls for us as well. And it doesn’t matter that the fight is taking place in hostile-to-Russia America. It is America’s elite that are hostile, whereas the people, just like the Russian people, don’t want Pussy Riot in their churches and are trying to defend their crosses and their prayers.

The Bladensburg Peace Cross is a century-old, 13-meter high memorial (approximately 43 feet) in the state of Maryland. It was built in 1919 at the initiative of a dozen mothers who lost their sons on the fronts of World War I. The cross stands at an intersection of an expressway, which is accordingly called the National Defense Highway. The idea behind the construction of it all was, as is documented, to preserve the memory of the soldiers and to invoke “patriotism and loyalty to the nation.”

The memorial stood for 100 years without bothering anyone. Veterans laid flowers nearby, and then, in 2014, three citizens filed a lawsuit, declaring that a religious symbol on public lands – the Christian cross — violated the Constitution. Get it out of our sight, they said.

The fight went on for nearly five years with arguments, appeals and now, the final decision. The Supreme Court has ruled that the cross can stand on government land and that it doesn’t violate the Constitution because in this instance, it is more than a religious symbol. It embodies a different idea as well.

The decision was rendered by a majority of the justices with two dissenting votes, Justices Ruth Bader Ginsburg and Sonia Sotomayor. Justice Ginsburg asserted, “The principal symbol of Christianity around the world should not loom over public thoroughfares, suggesting official recognition of that religion's paramountcy.”

Some American experts believe that the court’s June decision may have major consequences, since the precedent will help resolve other such conflicts across the country. And there are many. For example, a long fight was waged over a war memorial, also in the shape of a cross, in California. It’s called the Mount Soledad Cross. The litigation lasted more than 25 years!

That memorial, in the shape of a cross more than 13 meters tall (approximately 43 feet) was built on state land in 1925. In 1989, an individual sued on the very same basis as the suit against the cross in Maryland, claiming that a religious symbol on public territory violates the Constitution.

Following several legal proceedings and appeals, a local veterans association finally bought the land under the cross in 1991. The case ended with a court decision handed down in 2016 to the effect that the main problem – a religious symbol on federal land – had been eliminated and therefore the cross could remain where it stood.

In the United States, as you can see, an unending fight against Christianity is underway. It is precisely such an impression that is being made on observant citizens as now, in one place and then another, prayer is abolished in state institutions (there was also a years-long fight in Canadian Quebec!), people demand that Christmas trees be removed from those places, someone gets annoyed by people wearing crosses around their necks, or someone is offended by crosses hanging on walls. Even saying Merry Christmas rather than Happy New Year has now become a bold move for local politicians to make.

At the same time, other religious symbols continue to stand in peace without riling anyone — neither crescents on mosques nor menorahs along the streets. Moreover, Muslims go around in hijabs, Jews wear Stars of David around their necks, and Sikhs in Canada are allowed to go around with turbans and kirpans (daggers!), as required by their religion.

And only the crosses offend. (One can observe the very same thing, however, in Russia as well. The liberal community endlessly rails against churches, priests, church ladies and candle production, and constantly keeps count of the Russian Orthodox Church’s money, but never once has it dared to count the money of synagogues or mosques. It must be that all the earthly angels minister there, while all the devils have assembled at the Russian Orthodox Church. And we can all only be glad for the peacefulness in synagogues and mosques, but one nevertheless wishes that all the religions in our country were truly equal and that none of them be attacked.)

The fight against Christianity in America takes various forms. And one has to give credit to the inventiveness of those engaged in the fight, always finding legal loopholes by which it’s possible to drag Christians through the courts or deny them work.

For example, in Canada the path to employment has been essentially closed to young Christian attorneys by means of their exclusion from a professional association. The reason was that when they matriculated at Trinity College, they took an oath not to enter into homosexual relations or heterosexual relations outside of marriage.

From time to time on the continent, businessmen who have refused, for example, to print brochures for the LGBT community or who have refused to bake a cake for a same-sex wedding have been sued. To justify oneself by saying “my religion forbids it” is useless. “Believers’ rights” have long since become an empty phrase.

Doctors who are believers [in Christianity] are forced one way or another to participate in assisted suicide. If one does not want to personally administer a lethal injection, one can refer the suicidal person to someone who does. One is obligated to make the referral.

In schools, controversial sex education programs are being introduced, over the protests of parents or despite the fact that their faith forbids them from attending such classes. Catholic schools tried to avoid this sad fate, but they failed. They were chided for receiving money from the government. If you take the money, you do what the government says. (And no one cares that a certain Ben Levin, the Ontario education minister under whom the sex program that scandalized parents was created, was convicted on child pornography charges.)

Christians are resisting. There are fewer and fewer of them, first and foremost because the continent, as statistics show, is increasingly becoming non-white, but also by virtue of a prevailing atheism. So while there are fewer and fewer Christians, they are trying to defend their faith, defend their children from gender experiments, and defend military monuments. And the cases of the crosses in Maryland and California are one such triumph of common sense.