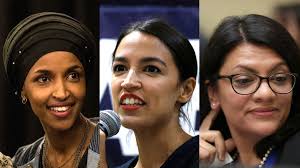 America is the only country in the world that is composed of different peoples from all over the globe. It is a mixture of Europeans, Asians, Africans, Southeast Asians and Indians. But the United States was built upon the ruins of Native Americans. Donald Trump himself is of British descent, Barack Obama is of Muslim African origin, and George Bush was British and Irish. Today, Trump shot the following tweets off to his followers. On Sunday, the American president called on female Democratic members of Congress who are of foreign origin – without specifically naming anyone – to “go back” to the countries “from which they came.” This pushed high-ranking Democrats to call these tweets racist and xenophobic.

Last year, Trump was quoted as referring to African countries as “shitholes,” in addition to speaking about an “invasion” of immigrants in the United States illegally.

In his tweets, Trump mentions “Progressive Democrat Congresswomen” by which he seems to mean the group of liberal women who were soundly elected to the House of Representatives for the first time, such as Alexandria Ocasio-Cortez from New York, Ilhan Omar from Minnesota and Rashida Tlaib from Michigan.

Trump did not name anyone specifically, but said they “originally came from countries whose governments are a complete and total catastrophe, the worst, most corrupt and inept anywhere in the world,” and added that these women are “loudly and viciously telling the people of the United States, the greatest and most powerful Nation on earth, how our government is to be run.” Trump then added, “Why don’t they go back and help fix the totally broken and crime infested places from which they came?”

Ocasio-Cortez was born in New York but she is of Puerto Rican descent. As for Tlaib, she was born in Detroit and is the first American of Palestinian origin elected to Congress. Omar came to the United States from Somalia as a child. She is also the first black Muslim in Congress.

Democratic House Speaker Nancy Pelosi warned her party about the menace liberal policies pushed by Ocasio-Cortez and other progressives create for Democrats who hope to defeat Trump in the 2020 presidential election.

But today on Twitter, Pelosi criticized the president’s attack. “I reject Trump’s (@realDonaldTrump’s) xenophobic comments meant to divide our nation,” Pelosi said. She added that Trump’s comments “reaffirm [that] his plan to ‘Make America Great Again’ has always been about making America white again.”

In turn, the Council for American-Islamic Relations condemned Trump’s tweets. CAIR National Executive Director Nihad Awad said, “It is sad to see the occupant of the Oval Office transition from empowering and encouraging racist taunts to actually using them himself.”

Trump’s statements targeted members of Congress with Islamic origins. Tlaib is of Arab Palestinian descent and Omar is of Somali descent. If these two congresswomen had been of Jewish descent, Trump would have bowed to them. Unfortunately, Trump leads the world according to his own views and his own business thinking. The world is now endangered by the possibility of war, maybe even a world war, which would result in damage and devastation to all humankind.

Trump has succeeded in milking the Gulf cash cows. He has resoundingly succeeded in getting them to come to the White House. He asked Saudi Crown Prince Mohammed bin Salman to come for a “second milking” after the Riyadh Islamic Summit where Trump became the “Sheikh al-Islam.”* Several days before, he also asked the emir of Qatar to come for his “milking” and then milked him dry! You have played your hand well, President Trump, you clever milkman.

*Translator’s note: Sheikh al-Islam is an honorific title. The author is ironically saying that Trump is now a leader of Islam because of his control over the Saudis.