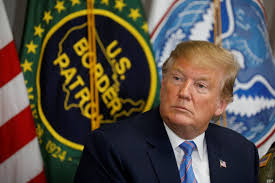 Immigrants living in the U.S. illegally, now detained in the United States and who cannot prove they have resided there for more than two years will be expelled immediately without a hearing before an immigration judge, as has normally been the procedure until now. Previously, the so-called expedited removal was applied to people living in the country illegally who were intercepted within 100 miles from the border, and who were proved to have spent fewer than 14 days seeking the American dream.

The updated accelerated deportation process, which leaves migrants at risk of being expelled without judicial review, takes effect on Tuesday, July 30.

The new development assumes that U.S. immigration agents will use their discretion, based on Department of Homeland Security guidelines, and be able to identify when the lives and human rights of those displaced by violence are genuinely under threat. This delegation of responsibility came into effect two days ago, and there will be a period of 60 days for the government to receive public feedback.

It should be noted that there was a recent amendment that determined that migrants who had already crossed through a country where their lives were no longer in danger would be denied asylum vin the U.S. This has been branded as a flagrant violation of individual rights.

In her book “Dissecting Trump,” Gaby Soulé notes that Donald Trump has historically directed insults about exclusion at socially and economically powerful women who hold prominent public and political positions, and who are seen as female role models. The most recent example of this is the attack on four female Democrats who have been the target of racist insults from their president, who has demanded that they "apologize to [America].” [https://www.reuters.com/article/us-usa-trump-democrats/apologize-to-america-trump-tells-democratic-congresswomen-idUSKCN1UG0J2] Rashida Tlaib (Michigan), Ayanna Pressley (Massachusetts), Ilhan Omar (Minnesota) and Alexandria Ocasio-Cortez (New York) make up “The Squad” of progressives in the House of Representatives. They are all daughters of immigrants from different parts of the globe, women who have challenged the conventional narrative by arguing for better conditions for women and the immigrant population in the United States.

Not surprisingly, in the midst of a reelection campaign, Mexico will play a crucial part in the anti-immigration discourse aimed at the radical voter and which is attached to the psychopathological character traits of egocentrism, the need to feel power over others, and lack of empathy, in addition to manipulation, lying, impulsivity, lack of self-control and subjective interpretation of the law according to personal beliefs and desires. The world faces white-collar psychopaths who threaten peace and progress.