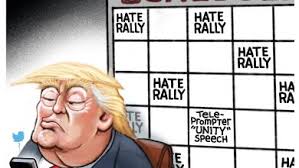 Each new mass shooting on American soil brings about the same cries of indignation. Twenty years after the tragedy at Columbine and seven years after the death of 20 children at Sandy Hook, will people finally react? The deaths of 20 people over the weekend of Aug. 3 and 4 in El Paso, killed by an avowed white supremecist, and nine other people gunned down, for unknown reasons, in Dayton, revived this painful call. The answer, unfortunately, will not come from American President Donald Trump.

In a televised statement on Monday, August 5, Trump condemned, as he should, these “barbaric slaughters” and “racism, bigotry, and white supremacy.” Does he think he has contributed, with his tweets, to the heightening of this rhetoric, he who has already referred to the arrival of Latino migrants as an “invasion”? He did not seem to. Incidentally, the president did not use the term “domestic terrorism,” which was recently used by the El Paso police. [https://www.realclearpolitics.com/video/2019/08/05/watch_live_president_trump_delivers_remarks_after_el_paso_and_dayton_shootings.html] [https://www.theatlantic.com/entertainment/archive/2019/08/trump-immigrant-invasion-language-origins/595579/] [https://www.cnn.com/2019/08/04/us/el-paso-shooting-sunday/index.html]

And he obviously steered clear of any recognition of the problem posed by the omnipresence of guns in his country. In his view, these tragedies are the product of people who suffer from mental illness and have been radicalized in most cases by online content. And what about the violence that is only found in video games? And the media! In a tweet sent out before his address, he accused the media of being mostly responsible, with its “fake news” and “the anger and rage that has built up over so many years.” [https://twitter.com/realDonaldTrump/status/1158340095608610816]

He opened the door to stronger background checks, but they still do not exist, because his party, which has control of the Senate, still has not taken up a universal background checks bill passed by the House of Representatives last February with bipartisan support. And when Trump brought up this idea in a tweet shortly after the tragedy, he suggested linking its adoption to a more aggressive immigration policy, even though the victims of El Paso and the shooter’s targets were Mexican.

These two shootings bring to light two outrageous problems in the United States: dangerously inadequate gun control laws and the growing strength of right-wing extremism, which fuels white supremacy. Unfortunately, Donald Trump does not believe in the first and is prepared to flirt with the second, either out of conviction or opportunism.

The only thing capable of getting the government to act would be a rallying of voters capable of making a difference on Election Day, which is what the Parkland students did for the midterms.

Canada can comfort itself by saying that if it runs into problems with guns and the rise of right-wing extremism, it already has the means of living up to the challenge. There are, however, still things that need to be done.

When it comes to matters of right-wing extremism, Canadian security and intelligence agencies have taken their time noticing, as Islamic extremism monopolizes their attention. The attack on a mosque in Quebec in 2017 changed things. The Canadian Security Intelligence Service does not hide its interest in the rise of the extreme right and the threat it can pose. In June, Ottawa put two right-wing extremist groups, Combat 18 and Blood & Honour, on its list of terrorist organizations.

As far as gun control is concerned, the main elements are in place, some improved by Justin Trudeau’s government, but a big piece is missing: a ban on handguns and military-style semi-automatic assault weapons. The Liberals should work on it, but, between studies and consultations, they now say they need the support of the people in order to go farther. We will keep an eye on their program. The Conservatives will not do any better, since they are against most of the changes that the Liberals propose and some deputies flirt openly with the pro-gun lobby.

The United States should not, however, be our model. Countries such as Australia and the United Kingdom see very few shootings, even though young people play the same video games as Americans and are exposed to the same glorification of violence. But these countries have put solid gun control laws in place and ban the possession of handguns and semiautomatics. They should inspire us, not our neighbors.