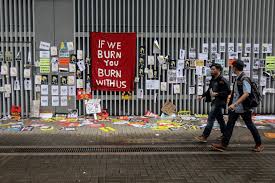 I believe any impartial observer of the situation in the Hong Kong administrative region of China, and the protests and demonstrations witnessed there for over two months, cannot ignore the clear American role in inflaming the turmoil of those protests, and seeking, by any means necessary, to benefit from them as a means of exerting pressure on the Chinese government in Beijing in the context of the trade war that has raged between the U.S. and China for years. President Donald Trump has sought to ignite this trade war over the last two years, and to use any means necessary to pressure China to comply with American demands in that trade war, which China categorically refuses to do.

Since the end of the British occupation of the province of Hong Kong in 1997 and its return to Chinese sovereignty, Hong Kong has been administered by a principle termed “one country, two systems.” This means that while Hong Kong is an integral part of Chinese territory, it retains a different political and economic system than that of mainland China, although the mainland maintains control over Hong Kong’s foreign policy and defense. As a result, Hong Kong’s investment activities and economic policies differ greatly from other Chinese provinces with the exception of Macau, which enjoys the same privileges as Hong Kong as a special administrative region. This is what prompted some Hong Kong residents to object to a proposed law, brought forward for debate in Parliament, which would require the extradition of some suspects for prosecution on the mainland or in Chinese courts, far from Hong Kong. The protesters are demanding the repeal of this proposed law, as well as noninterference in the province’s affairs by Beijing.

Naturally, Washington seized the opportunity to act as trusted adviser to Beijing, while cloaking its true intentions in flattery. President Trump said that he has no objection to meeting Chinese President Xi Jinping to discuss finding a solution to the Hong Kong crisis, describing Xi as “a great leader who very much has the respect of his people,” and stressing that he has “ZERO doubt that if President Xi wants to quickly and humanely solve the Hong Kong problem, he can do it.”

I believe President Trump’s comments are nothing more than an indication of Washington’s clear desire to see the crisis continue to smolder, as he realizes perfectly well that the Chinese president will not meet him to discuss a purely internal Chinese matter. Beijing has warned on more than one occasion against any outside interference in the Hong Kong crisis, be it from Washington or London, the latter of which is trying to play a mediating role since it sees itself as the "old owner" of the province. Washington’s linkage of the situation in Hong Kong to the trade war with China completely confirms that America does not seek to resolve the protest crisis so much as it seeks to employ those protests to serve its interests and benefit from them in its trade war against China.

The reality on the ground in beautiful Hong Kong, which I recently visited, confirms that someone is instigating the protests, especially when we consider the fact that the province enjoys semi-autonomy in all its decisions, both economic and parliamentary. The province has its own currency, the “Hong Kong dollar” (eight Hong Kong dollars equal $1 USD), and is at an advanced level in all areas of life, whether economic or social. It welcomes a large number of tourists yearly (exceeding by perhaps three or four times its population of 7 million), its huge ports play an important role in the movement of global trade and investment, and it has privileged relations with the Chinese mainland.

Thus, the outbreak of this crisis represents a clear challenge to Beijing, not only in its dealings with the province of Hong Kong, but also in the way it manages its conflict with a U.S. administration that is seeking to increase commercial pressure on China by using the Hong Kong protests. This is similar to America’s use of, and continuous military support for, the province of Taiwan, as well as its support for the Dalai Lama, as part of its economic and political war against China. China’s political leadership understands this well, and is working to counter the U.S. and even triumph in this struggle by way of sensible domestic and foreign policies.

Therefore, the Hong Kong crisis has exposed the fact that trade wars are not only related to the economy; rather, politics are the key, decisive factor in all types of wars.