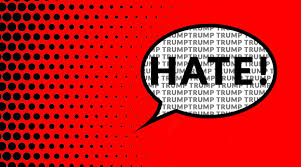 And once again, President Donald Trump returns to the attack. Everything seems to indicate that his attitude toward us is not likely to change for the better.

In his speech today, Trump included a new attack on Mexico, which, like Chimoltrufia,* he says one thing, then another. After the onslaught regarding immigration issues, now he adds drug trafficking. And the rampage against our country and our government obviously undermines our sovereignty, simply because we have to deal with the whims of the most racist and egotistical president in the history of our northern neighbor.

And though it is possible to be critical of our government for effectively acquiescing to his whims, it must be remembered that Trump is the president of the most powerful country in the world; caution has been the hallmark of the Mexican government’s modus operandi.

Trump’s racism is confirmed by the blatant violation of human rights in the United States, which has been documented by consistent stories of families being separated for one reason, pure and simple: the place they were born. Trump not only incites hatred toward other races, but he also promotes empathy for Aryan supremacy, which approaches the most intractable fascism.

Trump is a threat not only to our fellow Mexicans and to our government, but also to the world. One can hope that international institutions will speak out promptly and vigorously in the face of that government’s abuse of immigrants, presumably including Mexicans.

The hatred toward our country and the contempt for Mexicans are evident in every official action that the president takes in relation to public policy on immigration. And it’s not just in his speeches, because this contempt unfortunately cost the lives of eight of our fellow Mexicans this past Aug. 3 in a store in El Paso, Texas. The only mistake these Mexicans made was believing in the highly-touted American dream, which that country and its government have promoted for many years precisely to exploit cheap labor.

In reality, the United States was built through immigration. The first light-skinned settlers who arrived there were fleeing their birthplaces for many different reasons. President Trump himself, even with all his economic and political power, can’t deny that his origin, and his family’s origin, lies in immigration; through good luck, his family achieved a comfortable life in the U.S. So it is ironic that, forgetting his origins, the U.S. president today has set himself up as the principal oppressor of human beings who are less fortunate than himself, the immigrants.

Out of the Corner of My Eye

One can see that the renewal of the Morena leadership at the national level will not be a walk in the park.** And among the four candidates for leadership who have so far stepped forward, we can see that they have accumulated so much experience over the course of the years that, as the saying goes, “The one-armed man is playing violin.”

Today, the Morena Party is getting stronger as a political space, permitting whoever might be in power to grow on the political scene. Morena is now having the problems that PRI*** had from holding all the political offices and, above all, from the election results they got across the length and breadth of the Mexican Republic.

Today it is clear that for many who are politically active in that party, their main adversaries will not be those who in normal circumstances would be in the political election struggle. Today, the primary and immediate adversaries of the Morenistas are the Morenistas themselves.

**Translator’s note: Morena is the Mexican political party founded and originally headed by the current Mexican president, Andrés Manuel López Obrador. Its followers are known in Spanish as Morenistas.

***Translator’s note: PRI, from its initials in Spanish, is the Institutional Revolutionary Party, which held power in Mexico from 1929 until 2000.