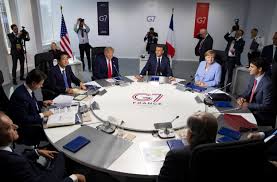 America, the guide of the postwar international order, repeatedly acts in a way that only prioritizes its own interests. How will we get past this difficulty and ensure multilateral agreements in the future?

You could say that this was the main theme of this year’s summit of the seven leading countries (the G-7 summit). French President Emmanuel Macron, the meeting’s host, must have been vexed by the gravity of the responsibility of heading off a breakdown in the summit.

The unusually short communique reflected this difficulty. The “fair trade” that it urged upon the world are mere words. Policies on climate change, on which the U.S. government has turned its back, were excluded from the document from the start.

Although American President Donald Trump is the heart of the problem, Macron held a joint conference with him, anyway, to close out the meeting. This may have been a desperate measure to stave off estrangement with America.

It is fair to say that the role of the main stage for economic debate has passed to the Group of 20, but in terms of the ideologies that value freedom and democracy, there are still no structures that match the communication power of the Group of Seven.

That means that it’s not as if there were no results this time. The foreign minister of Iran, with whom the Trump administration has deepened its confrontation, was invited, and each country encouraged a solution through dialogue. There may be examples of problems emanating from America that are attended to by the G-7.

Historically, the origin of these summits is linked with the decline of American supremacy. In the mid-1970s, when the world economy was rocked by the dollar and oil shocks and the U.S. lost the Vietnam War, the Great Powers gathered in France.

Along with demonstrating the West’s unity during the Cold War, the summit was a manifestation of multilateralism to stabilize the international economy, which America could no longer support by itself, and to protect order. Now that America’s guidance is even more eclipsed, the function of order and maintenance is again disputed among Europe, Canada and Japan.

Of course, we are in an era where issues pile up - like climate change, terrorism, immigration and refugees - that can be addressed only through cooperation on a global scale.

The United Nations does not have the capacity to cope with confrontation between the West, China and Russia, and with instability among rising powers, the actions of the G-7 have meaning. This session provides a good example: The fires in the Amazon forest were presented as a problem of global concern.

The G-7 will face another challenge next year. America will host while in the midst of a presidential election.

Trump has long been calling for Russia’s restoration, but it should not be recognized. By unilaterally annexing the Crimean Peninsula from its neighbor, Ukraine, Russia does not abide by the important international principle of rule of law.

History’s lesson is that there are no winners in a world where the philosophy of putting your own country first is spreading. The advanced democracies must fall into line and refrain from forgetting the meaning of the ideals they uphold.