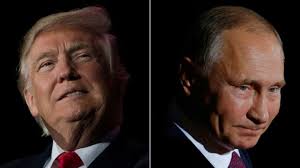 The U.S., like the West as a whole, continues to adopt a highly inconsistent policy toward Russia. On the one hand, the Americans are interested in supporting Moscow in solving global and regional problems. They are primarily interested in managing the Iranian, Syrian and North Korean crises on terms that are favorable for the U.S. The initiative regarding the return of the Group of Eight major industrial nations format that was active from 1998 to 2013, a group which was put together with French President Emmanuel Macron, confirms this. While they did vote for strengthening cooperation with Moscow, the Group of Seven leaders of the Western world, with the exclusion of Italy, did not support this initiative at the recent summit in Biarritz.

President Donald Trump hopes that the G-7 will invite Russian President Vladimir Putin to the same summit in 2020. In Moscow, any contact with G-7 countries is considered useful and the group is prepared to explore such a proposal if it goes through. But this is not an end in itself for the Russian Federation. It is more important to begin the real process of normalizing relations in the military-political and financial-economic spheres.

On the other hand, the Americans are intensifying their sanction pressure on Russia. On Aug. 26, a second package of restrictions connected to the poisoning of former British intelligence agent Sergei Skripal and his daughter, Yulia, in Salisbury in March 2018, took effect. Russia was not proved guilty. Nevertheless, sanctions were introduced against Moscow, because officials there allegedly failed to show they had not used chemical and biological weapons.

The artificial nature of this problem is obvious in light of the Pentagon’s deployment of more than 200 biological laboratories across the world, such as in Ukraine, Georgia and other post-Soviet countries. The provocations in Syria by the pro-Western nongovernmental organization, the White Helmets, are just as alarming. Their representatives simulated chemical attacks on civilians—namely in the town of Douma, close to Damascus, in April 2018. This was then used by the U.S., Great Britain and France as a pretext for missile strikes against Syria.

The Russian Federation displayed resilience in response to the situation with Skripal, repeatedly offering to carrying out joint investigations. London shied away from this and blocked our diplomats from accessing Skripal and his daughter. The fact that the British leadership only considered the results of its own laboratory in Porton Down, which is controlled by the Ministry of Defense, is evidence that its actions are politically motivated.

The first package of sanctions imposed in response to the so-called Skripal case came last year. At the time, Russian state-owned companies were prohibited from exporting American weapons and dual-use products, excluding products used in the space industry and those necessary for ensuring the safety of civil aviation. At the same time, Russia was denied American loans, credit guarantees and other financial support.

The second package brought limitations on Russian state debt. Washington will block Moscow from receiving loans from international financial organizations. U.S. banks are prohibited from participating in the primary placement of Russian sovereign debt (on the secondary market such activity is allowed) and crediting the Russian government in any other currency apart from the ruble. Anticipating such a turn of events, the Central Bank of Russia is gradually implementing a policy of reducing investments in American bonds. In June 2019, such investments dropped to $10.8 billion. A month earlier, this figure was $12 billion.

The U.S. also implemented a ban on exporting dual-use products, which could be used for preparing chemical and biological weapons, to Russia. What is particularly significant is that the latest restrictions don’t have any practical meaning, as these types of weapons are not made in the Russian Federation. However, the sanctions could be used to exclude Russian companies from international markets, in a demonstration of unfair competition by the Americans.

Of course, the initial version of the second package of anti-Russian sanctions was even more severe. So, to please America’s closest ally, the United Kingdom, it was proposed that the U.S. reduce the extent of diplomatic relations; prohibit flights by state-owned airlines; stop Russian imports, including those of oil and oil-based products, and insist that the U.S. no longer provide loans to state-owned Russian companies (many of which are already under other American sanctions).

The Trump administration is not interested in a harsh stand-off with the Russian Federation, especially not during the upcoming presidential campaign. The trade war with China and the EU, the unsuccessful attempts to isolate Iran, the inability to resolve the Afghan and North Korean crises, the deterioration of relations with Turkey and many other factors are nudging Donald Trump toward attempts to improve relations with Moscow. This is precisely what forced him to postpone the introduction of the second package of sanctions over the “Skripal Case” for a year and to abandon harsher sanctions. However, this situation pushes him toward stronger resistance from Congress and the majority of the American elite. As a result, Washington’s policy will continue to be inconsistent with a downturn in U.S.-Russian relations.