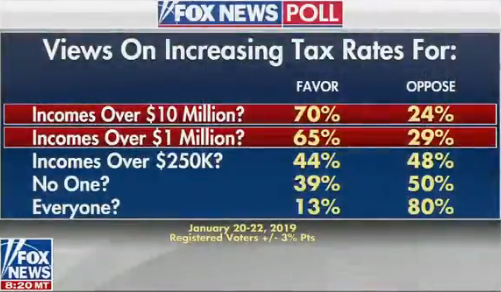 The Social Democratic Party’s tax cuts conflict with the times

“Every minute you’re angry about race is a minute you’re not thinking about class, which, of course, is the real divide in this country.”

This statement came from the news anchor at Fox News, a TV channel that has long been liked by U.S. conservatives and Republicans, as well as being Donald Trump’s favorite news source.

That is, at least until recently. This week, the president came down hard on the channel. “Fox isn’t working for us any more,” he exclaimed. It is telling that Trump believes that Fox News work for him, as they have for a long time pushed his agenda. According to American studies, Fox News is so skewed in its broadcasts that their most loyal watchers are the least well-informed in the country. Fox News simply makes people more stupid.

However, after years of serving the rich they proclaim: The left wants to confuse you with questions about racism to make you lose focus on the most important issue – inequality in society is increasing while the rich get tax cuts.

Billionaires Pushed Against the Wall

Why does a channel that has pushed such a hard-right-wing agenda suddenly make such a sharp left turn on equality? Live on air, they announce that Americans want higher taxes for the country’s rich – something their own opinion poll shows. Perhaps this is the reason. If the Fox News right are going to continue to be populist, this is the position they must take; this is also what their viewers think. But the hypocrisy does not go unnoticed.

Rutger Bregman was invited by Fox News just to talk about the importance of taxing the rich. He is a Dutch historian who became famous for pushing billionaires against the wall at the World Economic Forum earlier this year.

He was questioning why nobody talks about taxing the rich when thinking about how inequality should be fought. “It feels like I’m at a firefighters conference and no one’s allowed to speak about water.” Fox chose not to broadcast the interview, but it has been a success on social media.

That the right is starting to talk about equality shows that they are beginning to understand what most people want, but it also shows that the left hasn’t always been successful in owning the topic closest to their hearts. One manifestation of this in Sweden is when Expressen’s liberal editorial column questions how the rich manage to avoid paying tax on capital gains in the same way they pay income tax.

The Swedish Trade Union Federation economists agree. To reduce inequality, taxes for the rich must be raised; something even most Swedes agree with. Despite this, there has been no introduction of either property tax, inheritance tax or capital gains tax. At the end of the year even the higher income rate tax will disappear.

Perhaps Fox News populism feels like a long way from Sweden, but wouldn’t it be a shame if the right takes over the issue of economic equality – simply because the left hasn’t been credible enough?