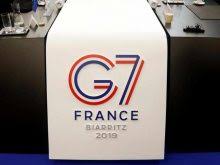 After three days of work it was definitely proven that the Group of Seven leading industrial nations has become practically useless. Once again, the divisions between Donald Trump and the others were so clear and notable.

The question of whether the international economy is or is not on the road to a recession was in the background throughout the weekend of the G-7 summit. The truth is that the program was ambitious, with wide-ranging topics, but everyone hoped to see some signal from Donald Trump about the trade war between the U.S. and China that is slowing down international trade and decelerating the world economy. However, after three days of work it was definitely proven that the G-7 has become practically useless as, once again, the divisions between Trump and the others were so clear and notable.

It didn't help that Prime Minister Giuseppe Conte resigned after the Italian Senate accused Matteo Salvini of putting his personal interests before that of the country and making political use of religious symbols ("religious unconsciousness," to which Salvini responded by kissing a rosary). Neither did Boris Johnson help as he pushes against the EU for not having reached a Brexit agreement, about which Johnson still has not presented any concrete proposal.

Luckily for him, it is unlikely that a no-deal Brexit will be the apocalypse that its adversaries predict. To cite Jean-Marc Puissesseau, president of the Port Boulogne-Calais, about the chaos of the Dover-Calais connection, "It is bullshit." This will, moreover, allow Johnson to claim victory whatever the post-Brexit results, to the despair of the remainers. For now, thanks to Boris for coaxing a few words out of Trump at the meeting about a trade agreement, which would have a better chance of really happening if Trump were not reelected.

As for where the world economy is going, on Sunday, Trump encouraged the crowd by admitting that he had "second thoughts" about the increase in tariffs on Chinese products, a statement taken to be in favor of easing trade relations. But White House Press Secretary Stephanie Grisham made it clear the next day that he had wanted to say that he would like to have the tariffs raised even further. Which is to say, they're going to last.

The trade war between the Americans and the Chinese has caused uncertainty, with action and retaliation, and a retraction of investment decisions and consumer confidence, leading to a fall in demand and production. In Jackson Hole, where the Federal Reserve's annual symposium on monetary policy challenges took place this year, the concern was with the policy's lack of margin, squeezed tight between historically low policy rates (2% in the U.S. and 0% in the eurozone) and very high debt stocks on the central banks' balance sheets, so as to make it hard to confront a possible recession.

To this, Fed Chair Jerome Powell added that monetary policy is not the appropriate tool for acting on the trade balance. Trump tweeted about him, “Who is our biggest enemy, Jay Powell or Xi Jinping?” Patience is needed.