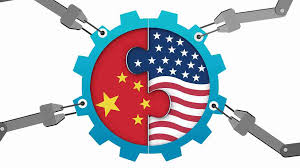 On the one hand, American companies that invest in China continue to turn a profit, and new companies in the Chinese market are full of ambition. The U.S. Rust Belt cities are booming because of Chinese investment. On the other hand, many retailers in the United States are on the verge of collapse, and a large number of small businesses are shutting down due to low income. Families are at risk of being unable to make ends meet due to high tariffs.

Recently, an increasing number of people are seeing that China-US economic and trade cooperation could possibly be of mutual benefit. Against the backdrop of the U.S. repeatedly imposing tariffs on Chinese exports and constantly escalating China-U.S. trade frictions, these hot and cold relations have created drastic shifts in earnings for American companies and families.

Pfizer Inc., a world-renowned pharmaceutical company, recently announced its new global headquarters in Shanghai, the first Pfizer headquarters outside of the U.S. Gao Tianlei, president of Pfizer Global, said, "We invest wherever the market is, and we have the will and determination to continue to plough deep in China."

The Chinese market has allowed U.S. companies to make substantial profit, and Chinese investment has revived the Rust Belt region of the U.S. that has struggled for many years. In Dayton, Ohio, during the 2008 financial crisis, tens of thousands of employees were laid off when the General Motors assembly plant closed. In 2014, Fuyao Glass Industry Group Co., Ltd. invested in Dayton to transform the original GM plant into a glass design and manufacturing plant, creating more than 2,000 jobs for local residents and igniting the hope of a renaissance in this historically industrial area of the United States. Philip Parker, president of the Dayton Area Chamber of Commerce, said that he hopes to see more Chinese companies investing in Dayton, creating opportunities for collective growth.

There is no winner in a trade war. Since the establishment of diplomatic relations between China and the United States, bilateral trade has formed the basis of a mutually beneficial relationship with interests that highly complement each other. This relationship benefits not only the two countries, but also the entire world. Constantly intensifying the trade war and even decoupling the Chinese and U.S. economies will only disrupt business operations, raise U.S. prices, and negatively affect U.S. economic growth and people's livelihood. As EU Trade Commissioner Cecilia Malmstrom said, additional tariffs are like "shooting yourself in the foot to hurt the shoe salesman."

Tariffs are high, and U.S. companies fall victim to these unjust attacks. Successful business operations require a stable and predictable market environment. A large number of small U.S. companies believe that uncertainties such as the size and duration of tariffs imposed on Chinese exports to the United States damage business development and make it difficult for them to plan. According to a recent survey published in August by The Wall Street Journal, small American companies’ confidence in the U.S. economy has fallen to its lowest level in nearly seven years. Rick Helfenbein, president of the American Apparel and Footwear Association, complained: "American retailers are already struggling, and a new round of tariffs will be the nail in the coffin."

For low-income American families, the constant increase in tariffs has made their already difficult financial situation even worse. “People that are hurting the most are the average family,” said Joseph Shamie, president of Delta Children's Products Corporation. “Having a new child means an added expense in general, and now that expense is even higher than it was before. How fair is that to them?”

One case after another, positive or negative, constantly demonstrates to the world that China-U.S. economic and trade relations are mutually beneficial. Reality is the best classroom, history is the best textbook. The development of China-U.S. trade relations is not without its twists and turns, but the two sides can solve problems rationally through dialogue and negotiation. They can resolve conflicts and overcome differences as bilateral economic and trade relations become more mature and stable. The expansion and constant improvement of China-U.S. cooperation has become an important driving force behind the development of the global economy.

Presently, the global economy is facing an increasing risk of recession, and the economic development of China and the United States is also facing enormous challenges. China-U.S. cooperation is beneficial to both sides, and conflict hurts them both. Cooperation is the correct choice. The friction between China and the United States regarding trade will ultimately need to be resolved through calm negotiation and cooperation. A mutually beneficial agreement between the two countries aligns with the interests of both, and also aligns with the expectations of the rest of the world.