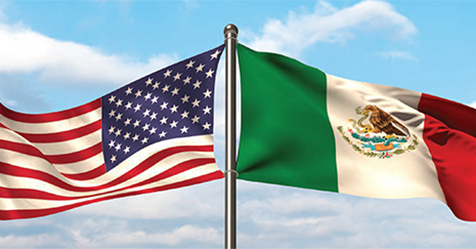 The reality is that Mexico depends on the U.S. market for 80% of its exports.

Realism in politics, especially international politics, is always useful; although often unappreciated, it tends to provide the best results.

By this framework, geopolitics is a damned science, one that addresses the relationship between politics and geographic environment. In the worst interpretation of the word, it “justifies” imperialist designs, and at best, it acknowledges realities and allows action to be taken accordingly, hoping to work towards an eventual change in circumstances based off of facts and realities.

In some ways this was the lesson that Foreign Secretary Marcelo Ebrard offered on his visit on Tuesday to Washington. He looked for the best result from an impossible situation, and the triumphant report provided to the Mexican public reflected just this. Yes, they managed to avoid the imposition of tariffs, but in return it was agreed that immigration surveillance will be maintained in accordance with Mexican law, and yes, it will avoid being classified as a “safe third country” even if the practical details suggest this may be a possibility. And yes, the need for the United States to freeze the illegal arms trafficking to Mexico was also raised. Yes, they put on a dignified front.

In fact, part of the issue is that Mexico will have to comply with laws that have been marginalized. All that remains is for Mexican authorities to control smuggling into their territory, or to re-establish the rule of law in national territory.

Canada has done this in some way, fulfilled its commitments and later argued with the U.S. about some of its omissions, such as its tax attitude towards arms trade.

But the fact is that Mexico sits on the weak end of the equation. The reality is that Mexico depends on the U.S. market for 80% of its exports and that despite all the efforts already made, real or imaginary, over various decades to alter the situation, it is unlikely to get results for many more years to come. At best, you have to start sometime.

The reality is that outside of business, it is geography and society that connect us, too. Two thousand miles of border also imply a common environment, be it river basins and oceans, or deserts and rivers; they imply shared problems and a necessity to cooperate and negotiate. And this is without even starting to talk about social factors, like how the population of Mexicans or people of Mexican origin living in the United States, or the population of Americans or those of American origin living in Mexico have real interests in coexistence.

The funny thing is that two presidents without any apparent interest in international affairs have arrived at similar conclusions: The United States needs Mexico to cooperate with security, even if they must get this through extortion; and Mexico needs a relationship with the United States, even if it’s hurtful for its public image.