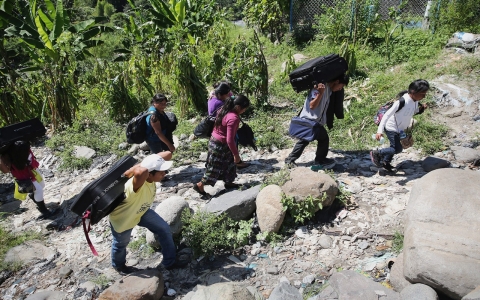 Guatemalan emigration to the United States is a painful phenomenon whose origins reach far into the past.

Recently, about four years ago, Barack Obama’s Democratic administration began to speak about the difficulty of absorbing Spanish-speaking immigrants. In some parts of the United States, as well as in some parts of Mexico, El Salvador and Honduras, this affirmation was interpreted as an exaggeration because this type of immigration has historically been seen as necessary and beneficial for all parties involved. American employers tended to look the other way when immigrants and their families had no documentation because then the businesses could pay these immigrants salaries below the minimum wage, thus earning more money and making product prices more attractive to consumers.

For years, undocumented workers were mostly of Mexican origin, but later, a greater number of people emigrated from the Northern Triangle (Guatemala, Honduras and El Salvador). As the Mexican economy began to improve, migration from Mexico slowed to a lower, but continuous stream of people. Simultaneously, emigration increased from other countries, like Colombia and Cuba, and those emigrants tended to settle in New England, in cities like New York. Meanwhile, emigrants from Guatemala and the other countries of the Northern Triangle also went north, often to cities like Chicago. In the case of farmworkers in the United States without documentation, the benefit of emigration to the United States consisted of earning better pay in comparison to what they could earn in their countries, even if such pay was substantially lower than American salaries.

The national economies of countries from which immigrants without documentation hail were beginning to improve. In Guatemala, large houses called remittance houses began to appear, and the look of towns started changing, such that neighborhoods of houses were built with no uniform design or style.

A new demographic is shaping some of the emigrant population in the United States: native people from South America. For example, a group of Huehuetecos moved to Florida to cut oranges. There, their children were born, and the children, like their parents, didn’t speak Spanish and could barely manage in English. At one point, when a crime was committed, English-speaking authorities needed to communicate. Authorities sent a Cuban American official to facilitate the communication in Spanish, but that failed. The authorities brought someone from Huehuetenango to interpret for the native Guatemalans, but the interpreter needed the ability to understand and explain legal terms. That, too, failed.

It should be noted that official data also indicate that many Mexicans have returned to Mexico, and fewer are coming to the U.S., although still they enter.

The United States has lost its image as the country where immigrants are welcome.

At heart, it is the terrible economic situation of the Northern Triangle countries that forces people, who have literally no opportunities, to emigrate – to give themselves over to coyotes (human traffickers at the border), to attempt crossing an immense and often deadly desert, and, in the current political situation, to face the inhuman policy of separating parents from their children when they arrive at the now fenced off border.

In short, the Northern Triangle needs a type of Marshall Plan, adapted to the reality of the region, and that confronts systematic corruption. Many people in Guatemala have no option but to emigrate, aware of the pain of separating their families – spouses, children and parents. To me, those who suffer most are those children born in the United States to Guatemalan parents. If the parents are deported, these children cannot easily adapt to life in Guatemala because they don’t know their families, and because the way of life here is too different. Emigration is one of the most painful human dramas, especially when circumstances force it to happen, and when it will necessarily mean poor treatment and low wages, if wages are paid at all. Guatemala, sadly, is not a place where people can improve their condition.