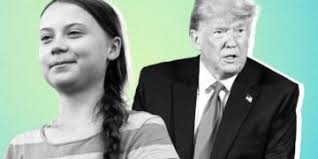 Only decisive leaders who take action against climate change were welcome at the U.N. Climate Action Summit in New York. Yet, the mood was emotionally charged because of a lightening-quick visit by Donald Trump and a thundering speech by Greta Thunberg.

It was Greta Thunberg versus Donald Trump on Monday during a specially convened climate summit at the United Nations. The video speaks volumes. It is a meeting that is not a meeting, at a place that was designed to bring the world together. The activist’s face displayed the fury of a thunderstorm when the American president, who unexpectedly made a quick visit, entered the building, sullenly muttering to himself. She sees him; he does not look at her. It is a clash of two worlds. One world is furious. The other ignores that.

We are going to do things completely different, U.N. Secretary-General António Guterres thought last year, when he noted that greenhouse gas emissions were continuing to rise and that the climate was continuing to change as the world was headed for, as he called it, collective suicide. The secretary-general therefore, created a Climate Action Summit, a meeting at which countries would encourage each other to do better, set up according to the standard trick that every constructive party uses: if you don’t want any jerking around, you should not invite jerks.

On Monday, the resulting summit took place in New York, on yet another unusually summer-like autumn day in the country that rejects climate change (at a federal level). In the rooms and garden of the United Nations, government leaders, activists and CEOs who believe that it is time to take greater action to turn the tide, and who have ideas about that, walked about.

Action, that was what it should be about.

As Dutch Prime Minister Mark Rutte put it, “It does not make much sense to yell all the time. The neighbor does this wrong and the neighbor does that wrong. Very many things do happen and I am positive about that.”

Rutte was one of the 60 government leaders who made it through the balloting. On the stage on Monday, the only countries that were welcome were those who could describe an ambitious account of emission reduction, a story that could serve as an example for the other countries. About 40 others did not meet the cut, and another 60 did not even submit anything at all.

And thus global polarization has also infiltrated international climate politics. So far, the international community has always acted together. The consensus model of the so-called COPs, the biannual, notoriously dreary climate conferences that, after two weeks of awkward back and forth, always result in a last-minute unanimous statement that can be used in many different ways by participating countries, and which always glosses over any conflict. On Monday, Guterres wanted to make it clear: there are good guys and bad guys in the climate arena.

It created a more activist atmosphere, and, in a way, a more optimistic setting than at those “normal” climate conferences. Yes, a lot still needs to happen to reduce greenhouse gas emissions, but it can be done. “It is not easy, we have to make sacrifices,” said Henrik Poulsen, CEO and president of the Danish energy company Ørsted (formerly Dong). “But we have switched from coal, oil and gas to wind, and wind is much cheaper than fossil power production. [It shows] how governments setting clear and ambitious targets provide investment visibility for the private sector, which again drives innovation, cost reductions, and large-scale deployment.”

Rutte was also positive. He made an effort to reach consensus at the climate table as an example for the rest of the world. “It might take rather long, but once you have finished talking, the execution goes much faster.” According to Rutte, “We can continue to drive a car.” Rutte believes that we should not only communicate fear. Doesn’t climate change also offer economic opportunities? He pointed out the importance of adaptation, adjustment to the effects of climate change through building higher dikes and providing better coastal protection. “The Netherlands has been doing that for hundreds of years,” he said. “We are now active in New Orleans, New York and Boston. There are possibilities if you act upon them quickly.”

But it is exactly that translation of worries into possibilities that disgusted Thunberg. “How dare you!” she told a room full of slightly perplexed world leaders. “We are at the beginning of a mass extinction and all you can talk about is money and fairytales of eternal economic growth … We will never forgive you.”

To drive her point home, Thunberg and 15 other children filed a U.N. complaint against five countries (France, Germany, Argentina, Brazil and Turkey) who, in her eyes, have violated the U.N. Convention on the Rights of the Child, because they have not done enough to prevent climate change while knowing what the consequences were. Thunberg said she does not want any monetary compensation as long as the countries acknowledge their mistakes and repent.

The United States got away scot-free because it has not signed the U.N. Convention on the Rights of the Child. Isolationism sometimes works. President Trump knows. He left the climate summit after a few minutes, without saying a single word.