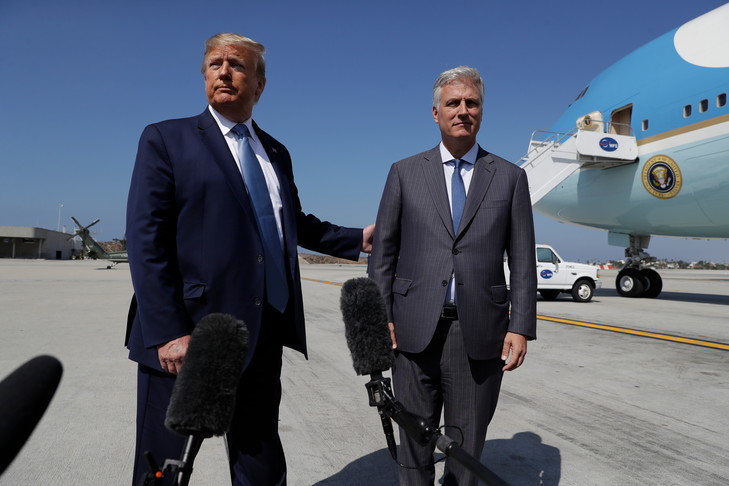 On Wednesday, Sept. 18, the American president announced he had chosen a Republican attorney to succeed the excitable John Bolton. Bolton’s successor will be the fourth person to take up the position in less than three years.

Working with Donald Trump in the White House is no easy task. Even less so when it comes to advising him on matters of national security. Since January 2017, the American president has already gone through three men, including John Bolton, who was dismissed at the start of September. Three advisers, which is as many as Barack Obama had in the eight years of his presidency, and one more than George W. Bush had during his two terms in office. However, the newcomer, Robert O’Brien, presents a less controversial profile than his predecessors.

A Republican Attorney from the West Coast

By choosing O’Brien, Trump seems to have changed his approach. Done with ex-military men (Michael Flynn and H.R. McMaster) and the warmongers (John Bolton); a man of law instead. At 53 years old, this University of California, Berkeley Law graduate is among California’s most important attorneys.

And it is through law that O’Brien became interested in international affairs, first as a part of a large firm before founding his own practice in Los Angeles. But before he was appointed, in May 2018, as the special presidential envoy for hostage affairs, a position created by Barack Obama and continued by his successor, his foreign policy experience was limited to ad hoc assignments at the crossroads between law and diplomacy.

However, he is more active in conservative think tanks, defending a traditional Republican approach in his writing in keeping with Ronald Reagan, and adopting Reagan’s slogan “peace through strength.” This classic approach within the American right wing – suspicion of Moscow, hostility toward authoritarian regimes, etc. – led him to advise Mitt Romney, a Mormon like himself, during Romney’s 2012 presidential campaign, then Scott Walker and Ted Cruz, in their race against Trump six years later during the Republican presidential primaries.

Washington D.C. welcomed this choice of a more discreet and moderate adviser than it did his predecessor, notably because his personality seems more fitted to the complex role of advising on national security than that of, for example, John Bolton.

This position, which does not require confirmation by the Senate, a compulsory step for all important roles in American government starting with the secretary of defense and secretary of state with whom O’Brien will have to work, is in keeping with the work of both an adviser and a coordinator. The National Security Council was founded during the Cold War to coordinate the work and the concurrence of different branches of the military, diplomatic corps and American intelligence agencies. O’Brien will therefore have to provide his own opinion as much as he will have to facilitate the opinions of others in order to help the president make informed decisions based on access to different points of view.

By accepting this position, O’Brien is following in the footsteps of the great names of American foreign policy, like Henry Kissinger (Richard Nixon), Zbigniew Brzezinski (Jimmy Carter) and Colin Powell (Ronald Reagan). These predecessors played a key role in their time due to their vision of Uncle Sam’s diplomacy, their attitude during moments of crisis and the length of time they spent at the sides of the presidents they advised.

For O’Brien, the challenge is sizable, primarily due to the current climate set against a backdrop of the war on terror, tensions with Iran, Russia’s assertiveness and the emergence of China. The challenge is also formidable due to Trump’s personality, and his somewhat erratic foreign policy, viewed as such even in the eyes of his political allies. As a testament to this, there is the altercation that occurred recently between the president and an influential senator on matters of foreign policy. The altercation involved Lindsey Graham, a South Carolina Republican, who believes that “the measured response” from the president when the Islamic Republic took down an American drone in June was “clearly seen by the Iranian regime as a sign of weakness.”

"No Lindsey, it was a sign of strength that some people just don’t understand!" replied the president.