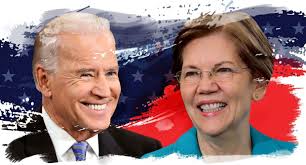 According to the latest poll by NBC and The Wall Street Journal, the two candidates are front-runners in the race for the Democratic presidential nomination in next year’s election. The Massachusetts senator seems to have a significant reserve of votes under her belt.

Are we headed for an Elizabeth Warren – Joe Biden face off in the race for the Democratic presidential nomination? The road to the White House is still a long way off, but the two candidates seem to be pulling ahead of their opponents. According to the latest poll released by NBC and The Wall Street Journal, Biden and Warren have gained more voter support in recent weeks.

Barack Obama’s former vice president continues to lead the race with 31% of voter support, up from 26% in the last survey in July. But Warren is catching up with 25% of voter support (she was at 19% in July), and is widening the gap between herself and her progressive rival, Bernie Sanders (who is at 14%). The other candidates are all under 10%, with Pete Buttigieg at 7%, Kamala Harris at 5%, Andrew Yang at 4%, Cory Booker and Amy Klobuchar at 2%, and Beto O'Rourke at 1%. The survey was conducted just after the third televised Democratic debate last week in Houston.

This is the first time a poll has placed the Massachusetts senator so high, while other polls already show Biden with more than 30% of voter support. Warren, the progressive candidate, is solidifying her breakthrough by uniting her supporters: 70% say they are enthusiastic about her candidacy compared to 57% in March. The opposite is true for Biden, where voter enthusiasm for his candidacy has dropped from 73% to 64%.

The poll also shows voters’ choices for each candidate in a race that is growing ever narrower. Several candidates have already thrown in the towel, with others expected to follow in the coming weeks. However, Warren is the second choice for 21% of respondents, while Biden is the second choice for only 11%. (Some 16% list Sanders as second choice, and 12% do so for Pete Buttigieg.) The combined number of people who consider Warren their first or second choice puts her in the lead, with a total of 46%, against Biden’s 42%.

The Massachusetts senator has yet to convince moderate voters and those in the Midwestern states, who often end up being decisive factors in an election. To win them over, she is going all out on the campaign trail. On Monday evening, she attracted nearly 20,000 people in New York. In a city sold on her ideas, she called for an end to corruption and collusion between public authorities and big companies. I have a plan for everything, she says. She has promised to prohibit private interest groups from lobbying former elected officials, to implement her wealth tax plan and to publish the declarations of politician assets.

"I don’t agree with the people who say that Biden would be the best candidate to beat Trump," said Zoe, a young New Yorker who came to listen to Warren. “She’s a lot more aggressive. In a debate, she’s able to bully Trump.”* The first primaries are in 4 1/2 months, so much could still change between now and then. “I don’t know who I’m voting for yet. But if the vote were today, I’d vote for Warren,” says Lisa.*

The former Harvard professor received more good news on Monday when the Working Families Party announced their support for Warren. The organization supported Sanders in the last presidential election and has grown in popularity among African Americans, especially in the wake of the Black Lives Matter movement. Although she doesn’t have the same level of support from black voters that Biden has, Warren will now turn her attention to winning minorities over to her campaign.