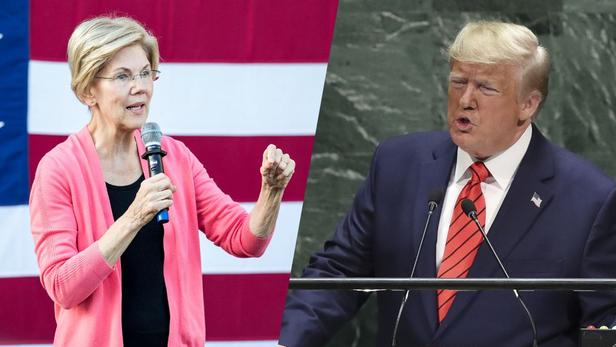 Impeachment proceedings initiated against Donald Trump could ultimately harm Joe Biden, as Elizabeth Warren catches up with him in the polls in the race to clinch the Democratic presidential nomination. According to Nicolas Goetzmann, Warren’s campaign platform is not too far removed from some of Trump’s policy choices.

If Donald Trump is indeed the target of an investigation that could lead to his removal from office, the pursuit of these proceedings could produce an unexpected result: the downright disappearance of neoliberalism from the U.S. political landscape four years after its 2016 defeat. By opening a Pandora's box that puts Joe Biden, the current poll leader, on the front line, the Democratic Party has opted to risk sacrificing the nomination of the only candidate still running with an economic policy platform based on the free market. Eliminating Biden would end an era that began on Nov. 4, 1980 with Ronald Reagan's election.

On Sept. 24, House Speaker Nancy Pelosi, who had long resisted temptation, initiated an impeachment inquiry into a phone call between Trump and Ukraine's new president, Volodymyr Zelenskiy. The decision was made primarily as a result of pressure from the left wing of her party – now the majority party in the House – a wing represented by candidates Elizabeth Warren and Bernie Sanders.

However, Trump's removal from office requires a two-thirds majority vote of the Senate, which is dominated by the Republican Party. Trump’s removal from office means that some 20 out of 53 Republican senators would have to abandon Trump on the eve of his reelection campaign. Such a scenario is based on the assumption that, first, a massive change of opinion will take place among Republican voters, who largely remain attached to the president, and second, an alternative Republican candidate strong enough to win the election will emerge. This scenario doesn't exist at the moment. Absent any new revelations, the inquiry in progress appears, on the contrary, to be a significant mobilizing force for Trump voters and donors alike.

Conversely, the inquiry will only lead to intense scrutiny of the Biden family's past Ukrainian dealings. This past involves both Hunter Biden, son of Barack Obama’s former vice president, who accepted an offer from Ukrainian natural gas behemoth Burisma to sit on its board of directors, and Joe Biden’s diplomatic skills. The scandal will also result in reviving similar accusations regarding Hunter Biden's dealings in China when he accompanied his father on Air Force Two during an official visit to Beijing in December 2013. As a result, Joe Biden's campaign has been severely weakened at the very moment when Elizabeth Warren has achieved a breakthrough in the polls.

But when it comes to Warren's unorthodox economic ideas, she's not so different from Trump. Although Warren would like to impose a significant wealth tax in a country known for its economic liberalism whereas Trump has significantly cut taxes for the richest Americans, the two candidates nevertheless agree on a number of points, whether they concern skepticism about the benefits of international trade, the monopoly held by digital giants or Trump and Warren’s willingness to fund infrastructure.

The issue of U.S. relations with China also brings the two candidates closer together. Even if their vision and methods undoubtedly diverge, they share a willingness to deal with trade issues between Washington and Beijing head-on. China is an important subject for U.S. voters, as 60% of them currently have a negative view of the China (which represents another weakness of Joe Biden's candidacy, since he has occasionally been considered indulgent toward China).

This reality hasn't eluded U.S. investors, who in May 2019 felt that Warren was the least market-friendly candidate among the Democrats, while more than two-thirds thought that Biden was the most market friendly. However, this same market-friendly approach risks disappearing as the impeachment proceedings play out.

Such a scenario can hardly be considered surprising in a country that let Trump win in 2016 based on unconventional economic policies aimed at U.S. workers. The political shift that we may see over the coming weeks and months could simply amount to the Democratic Party assimilating this new deal that Trump himself has grasped and talked about.

Similarly, political opposition to what is regularly referred to as neoliberalism has also become a majority view in the United Kingdom. Boris Johnson and Jeremy Corbyn aren't exactly the top choices of the U.K. business community, but that hasn't stopped them from dominating the country's politics.

While the West is in the grip of a deep ideological transformation, Europe's obsession with price management, deficits and debt, and multilateralism, as well as France's structural reforms, is strikingly at odds with the Anglo-Saxon world, which could give rise to a new capitalist model, the high-pressure economy, that would be more advantageous to the middle and working classes, just as François Mitterrand's election was at odds with that of Margaret Thatcher and Ronald Reagan during the transition from the 1970s to the 1980s.