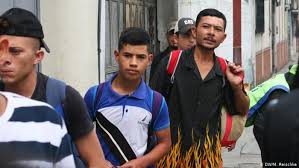 The popular saying that you can imagine tomorrow if you know today applies to conversations, not negotiations, between Honduras and the United States concerning immigration. The naive would describe these as open and frank, but actually, our country finds itself with its back to the wall, since a response to any doubts or objections raises another popular slogan, “just do it.” This is because, in the case of Northern Triangle countries, the U.S. imposes tariffs on products covered by trade agreements.

Those who can, do, according to statements from diplomatic sources close to the conversations in Washington, D.C., and this week in Tegucigalpa. An agreement needed to be worded in a way that was not frightening, using euphemisms for the message but ones that were palatable, in an effort to avoid sanctions that impact our economy in the form of duties and tariffs.

Honduras was threatened with sanctions of 10% to 20% on family remittances, tariffs on manufactured products and changes in the free trade agreement. One could say there was a noose around our country’s neck or a sword hanging over our head. The problems will multiply when it becomes known how far the agreement reaches in terms of asylum.

The threat goes directly for our economy’s jugular through three sources of foreign currency, opportunities for work and stable jobs that, in short, help reduce poverty and decrease the high level of uncertainty among the younger generations about their future, which is one of the strongest reasons for heading north.

Like Mexico at first, then Guatemala and El Salvador recently, our country is now engaged in a process of raising an invisible wall to thousands of Cuban, Haitian and African migrants who enter our country on their way north.

The State Department has confirmed that these migrants are passing through our country, that there are increased restrictions on this migration and that there are guidelines currently in place that control this activity. With the help of the United States, we can make a greater effort with respect to these people.

No matter what one thinks, Honduras will have to live with these immigration restrictions for better or worse as they are here to stay.