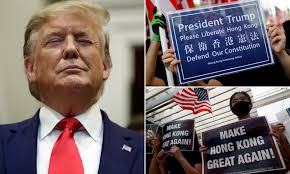 The 13th round of U.S.-China trade negotiations concluded on Oct. 11. President Donald Trump met with China’s Vice Premier Liu He at the White House, after which it was announced that the first phase in an agreement had been reached. However, according to the information both sides released about the negotiations, the results were vacuous, not at all the “substantial deal” Trump claimed it was. Although China made concessions on intellectual property rights and the opening up of financial services, these issues were never something that China objected to. Meanwhile, China agreed to buy $40 to $50 billion of U.S. agricultural products in exchange for the U.S. promise not to raise tariffs on $250 billion of Chinese goods on Oct. 15 (a threatened increase from 25% to 30%). This was perhaps the most important aspect of this first phase of agreement. Based on this agreement, Trump gained the upper hand, while China lost.

In addition, Trump will profit when China buys U.S. agricultural products. Approximately 10 states in the Midwest that rely heavily on agriculture will influence his 2020 reelection campaign. Now that China must buy large quantities of soybeans and pork, these states will be less of a threat to his campaign.

However, the issue of Hong Kong became an important negotiating point in this round of talks. Xi conceded to conditions regarding tariffs and agricultural products in exchange for concessions by Trump on Hong Kong, concessions Trump cares nothing about. However, these concessions are a major blow for protesters in Hong Kong, who are now in the midst of a dangerous situation.

When Trump met Liu at the White House, a reporter asked him about Hong Kong. Trump’s answer was firm, and he addressed three points: First, he confirmed that both sides had discussed Hong Kong and that he and Xi had also discussed the matter. Second, Trump said that the number of demonstrators in Hong Kong had decreased from the initial number (a reference to the 10 to 20 million demonstrators who marched in June). The weakened demonstration was positive and indicated that China had made progress. Finally, Trump asserted that Hong Kong should resolve the issue on its own.

Trump’s statement that the number of demonstrators has decreased shows he is clearly unaware of the situation. Since the end of August, the number of demonstrators has indeed decreased. But why is that? At least three factors have caused this. The demonstrations with 10 to 20 million people in June were authorized by the police, drawing regular citizens out onto the streets. On Aug. 18, the police only authorized a gathering in Victoria Park, not a march. Though 17 million people still turned out, this was the last large-scale demonstration. Since then, marches and gatherings have basically been forbidden, reducing the number of protesters.

Second, on Aug. 24 and Aug. 25, because it had been cited and attacked by the People’s Daily, Hong Kong’s most important transportation system, the MRT, was repeatedly halted, and stations near demonstration sites were closed. By China’s National Day, the MRT had been shut down completely. Without a means of transportation, people could not participate in the demonstrations, reducing the number of protesters.

Third, because the police are no longer authorizing demonstrations and gatherings, everyone who has gathered since the end of August is considered to be breaking the law. The police have used this reasoning to justify indiscriminate arrests. Since the ban on face masks at the beginning of this month, indiscriminate arrests have intensified; almost 2,500 people have been arrested.

Trump’s statement that Hong Kong can resolve the issue on its own reveals that he has agreed to China’s request that he not interfere in internal matters. Trump’s statement indicates that the U.S. will let the Hong Kong government decide the issue for itself. In other words, Beijing and Carrie Lam’s administration can fully carry out their policy of forcefully suppressing unrest. If the police become more brutal in their treatment of demonstrators, the U.S. will not intervene.

Trump’s attitude toward Hong Kong and the Hong Kong Human Rights and Democracy Act of 2019 that the House will soon consider is vital. Because the bill would be damaging to Beijing and Hong Kong government officials, it became an important issue in this round of trade talks. Although it is likely to pass the House of Representatives, which is led by Democrat Nancy Pelosi, whether the bill will pass in the Senate remains unknown, since Beijing is constantly lobbying Congress in the background.* Moreover, as long as Trump indicates he opposes the bill when it reaches the Senate, or tweets that Hong Kong should resolve the issue itself, Republican lawmakers, who make up the majority in the Senate, may be influenced with respect to their votes. Even if the bill passes in the Senate, achieving a two-thirds supermajority will not be easy. If the bill makes it to Trump’s desk without a two-thirds vote, he can veto it.

The issue of Hong Kong has now clearly become a bargaining chip for the U.S. and China. Trump is a businessman. Though on the surface he prioritizes America first, in reality, he prioritizes his own interests first. Getting involved in Hong Kong is not in his interest, so he simply doesn’t care whether Hong Kong survives or falls, or what the people there are fighting for. The protesters are naïve if they hope Trump will step in and save them!