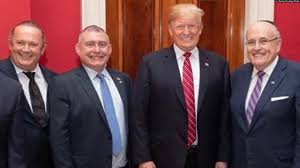 Lev Parnas and Igor Fruman managed to penetrate the highest levels of President Donald Trump’s inner circle. This is no small accomplishment, given that they were both born in what was then the Soviet Union; one in Ukraine and the other in Belarus. After the wall collapsed, they immigrated to the United States and became citizens. They put down roots in Florida, but did not lose their contacts in Ukraine.

These guys were perfect for Rudy Giuliani, Trump’s personal lawyer. Giuliani had been tasked with getting information that could be damaging to Joe Biden, the likely Democratic presidential candidate in 2020. Because Biden’s son, Hunter, was on the board of directors of Burisma, a Ukrainian energy company, the stage was set: it was easy to accuse Biden of using his influence to help his son.

Giuliani and his new friends (or clients, as he describes them) went to work. But a few months later – by this time faced with the scandal unleashed by Trump’s phone call with Ukrainian President Volodomyr Zelenskiy demanding information detrimental to Biden – the House of Representatives began its investigation. A subpoena was issued for Parnas and Fruman to testify.

They surfaced again on Tuesday, one day in advance of their appearance before Congress, in the Lufthansa VIP lounge at Dulles International Airport in Washington, calmly waiting for their flight to Frankfurt. They were intercepted by FBI agents at the boarding gate and arrested on charges of illegal interference in the U.S. election process.

What did they do? They received money from an as-yet unidentified Russian oligarch and contributed $325 million to the campaign of Texas Rep. Tom Sessions. In return, they asked for assistance from Sessions in removing the U.S. ambassador to Ukraine from her post. Sessions accommodated them, sending a letter to the State Department requesting that Marie Yovanovitch, a career diplomat with 30 years of experience, be removed from the position. They wanted her out because Yovanovitch insisted that any pressure on the Ukrainian government to carry out criminal investigations had to go through official channels. That went against Giuliani’s plans, as he was tasked with digging up mud on the Bidens. Even with their help and everything else, Sessions lost his reelection bid in 2018. But he did contribute to the ambassador’s removal.

On Friday, Ambassador Yovanovitch testified before Congress, defying orders from the White House, through Secretary of State Mike Pompeo, not to appear. She revealed a dirty campaign of smears and lies designed to bring about her exit from Kyiv to make things easier for Giuliani. The order came directly from Trump.

Giuliani is in serious trouble as a result of the arrests of Parnas and Fruman. In addition to instigating the campaign against the ambassador, these two tried to exploit their access to Giuliani in order to insert themselves into the murky, but highly profitable, world of the Ukrainian energy industry. Proclaiming themselves to be “associates” of Giuliani, they tried to monetize the relationship, for the benefit of the three of them.

The dominos are starting to fall. There will be more testimony this week, not all of it with the White House’s blessing. And the professional public servants, the career officers, are saying enough already, in the face of the excess and corruption unleashed by Trump. It’s about time.