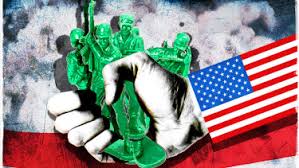 Donald Trump hopes to increase his odds of getting reelected by bringing troops home; he is therefore sacrificing alliances the U.S. has built over decades.

‘Unconscionable Betrayal of a Strategic Ally’

“U.S. President Donald Trump’s abrupt decision to withdraw American troops from Syria, clearing the way for a Turkish offensive against the Kurds, is an unconscionable betrayal of a strategic ally. One would expect such disloyalty from a fascist or otherwise dictatorial regime. And yet, today, it is the United States – a global leader with supposedly high ideals – that has emerged as the world’s perfidious empire.” That’s how the former Israeli foreign minister and internationally acclaimed intellectual Shlomo Ben-Ami started his opinion piece dedicated to the U.S. withdrawal from Syria.

He stated that Trump is tearing apart the network of political and military alliances patiently built by his predecessors. He is waging a trade war against his European allies. He washes his hands of the return of Islamic State jihadis to Europe; the jihadis who have until now been detained by YPG Kurdish forces. “Well they are going to be escaping to Europe; that’s where they want to go,” Trump said during a press briefing.

The outcome is that U.S. allies are being forced to make painful readjustments. India is now turning toward China and Russia. South Korea has noticed that Washington has lost interest in stopping Kim Jong Un from acquiring nuclear capability, and is now contemplating making potentially damaging compromises with its dangerous neighbor. Taiwan, feeling abandoned, will be forced to get closer to continental China. Saudi Arabia, aware of the insignificant value of its alliance with the U.S., is beginning emergency negotiations with the Iran it is so scared of.

No, the US Was Not Involved in ‘Endless Wars’

Saying that the vast majority of observers condemn the abandonment of Kurdish allies by the man in the White House would be an understatement. There has been criticism not just from Democrats and from former neoconservatives. An acclaimed diplomat such as Richard Haass, an important member of George W. Bush’s administration and current president of the Council on Foreign Relations, one of the most prominent think tanks, views the abandonment of the Kurds as catastrophic because it reinforces the skepticism American allies have about the viability of their partnership with the U.S.

Sure, one can understand that with the coming presidential campaign, Trump wants to be perceived as keeping his promise of bringing troops back home by an American audience which is fed up with foreign military adventures. However, he is grossly mistaken when he states that the U.S. has been involved in “endless wars” in the Middle East. Haass stated that “what the U.S. was doing in northern Syria was smart and efficient. It was providing Kurdish forces with logistical support, training and intelligence. However, the mere presence of 1,000 American troops was enough to dissuade Turks, Syrians, Russians and Iranians from attacking a territory won by Kurdish forces and its Arab allies against the so-called Islamic State group.

Haass highlights that, as always, Trump appears to be in tune with a big segment of the American public. A lot of voters have been seduced by his previous campaign slogan, “America First.” They think that the country’s needs in the areas of health care, education and housing have been sacrificed in the past in order to fund far-away wars that have only brought issues back home. An isolationist wave is currently sweeping across the U.S., and Trump plans to capitalize on it to win a reelection that is not looking in his favor.

According to Haass, history teaches us that periods of retreat often end in violent shocks that compel the U.S. to launch risky new undertakings. The belief that the U.S. needs only to retreat into its “American fortress” to avoid peril is an illusion. Attacks on the World Trade Center and the Pentagon should teach us a lesson.

According to Carl Bildt, renowned diplomat and former prime minister of Sweden, this diplomatic disaster could qualify for listing in the Guinness World Records, whose origin dates back long before Trump implemented the disastrous decision to withdraw from Syria that he announced last December. The U.S. has been unable to draw a coherent political line on the future of northeast Syria, which was liberated by Syrian democratic forces. U.S. diplomatic leaders have been busy trying to provide a coherent image to a foreign policy that President Trump has totally improvised by tweet.

Europeans, as well as Recep Tayyip Erdogan’s Turkey, which bet on the overthrow of Bashar Assad’s bloody regime, can now renounce their dream of a democratic Syria. Russians, Iranians and Turks will decide Syria’s future among themselves. Europe is once again absent. It has not grasped anything about what the 21st century is all about.