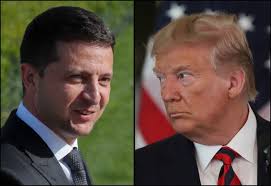 There is a Ukrainian point of view on the scandal that has now brought Donald Trump to the brink of impeachment. Here we find Ukraine’s weakness, but also the deep Russian desire for revenge against the West.

The military aid that Trump withheld, for his own benefit, to put pressure on his Ukrainian counterpart amounts to approximately $400 million, a sum that Ukrainians claim is urgently needed in the unfinished war against pro-Russian secessionists.

In 2014, when Moscow annexed Crimea, then armed and supported a revolt of Russian speakers from the far east of the country, U.S. aid to Ukraine spiked.

After adding the $400 million from the "Trump affair," as it is known in Kyiv, nearly $2 billion has been paid by Washington since the beginning of this crisis.

A forgotten and frozen conflict (or half-frozen considering the skirmishes and fatalities to this day) in the former Russian empire, the War in Donbass continues at a high human and financial cost to Ukraine. Approximately 13,000 victims in the past five years. As a result, Kyiv is still very reliant on military aid.

It was Russia's aggression in 2014 — as Kyiv put it — that led to economic sanctions against Moscow, along with a sharp increase in U.S. aid.

According to Moscow, the West is to blame, of course, as it had approached Ukrainian nationalists and offered Kyiv the (distant) promise of European membership in 2000 and 2010: the famous "partnership," that former President Viktor Yanukovych had dithered over due to pressure from Moscow.

Overthrown after the revolt of pro-Western nationalists in Kyiv in late 2013 and early 2014 (the "Euromaidan"), Yanukovych fled to Russia.

The fall of the Soviet Union meant true liberation for most of the people concerned. For Vladimir Putin, on the contrary, it is "the greatest geopolitical catastrophe of the 20th century."

The rapprochement with the West (joining NATO, then the European Union) of former Soviet Union countries (the Baltic countries), and those of Eastern Europe, was not received well in Moscow, even though almost all Poles, Lithuanians and Hungarians desired, or even demanded it.

But when pro-Western Ukrainians — the majority in the country — started wanting the same, it was too much. Moscow prepared its retaliation after Euromaidan, in Crimea and in Donbass. This is the geopolitical background of the scandal that has shaken Washington.

The “Trump affair" casts President Volodymyr Zelenskiy in a very unfavorable light. Elected in the spring with 73% of votes against Petro Poroshenko (the man behind the pro-Western rapprochement, though defeated for other reasons such as corruption and the public’s preference for a young novice), he has now lost a good one-third of his support.

This is because Zelenskiy had campaigned on a double promise: to find peace with Russia and to fight endemic corruption in Ukraine.

But the "Trump affair" is exactly at the crossroads of these two promises. During the famous conversation on July 25, the Ukrainian president slavishly responds, "Yes, Mr. Trump; I agree with you 100%, Mr. Trump; I'll see what I can do [about Biden], I'll also improve my English, Mr. Trump."*

He shows complacency in this morally dubious discussion. Although in the end, due to the impeachment scandal that broke out in Washington in September, he will not have to respond to the request for an investigation on Joe Biden and his son. The $400 million will eventually be paid, no longer representing a bargaining chip for Trump.

Under the surface of this story lies the Trump-Putin connection and, as a result, Trump's antipathy toward Ukraine ... poor Zelenskiy has lost a reliable ally, Washington. Kyiv can no longer rely on the United States as it could before.

Lately in Kyiv, the president is accused of wanting to make peace with Moscow at any cost, begging on his knees if necessary. And who’s laughing now? A Russian who goes by the name of Vladimir ...