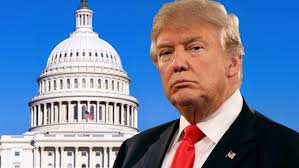 Witnesses are testifying before the House of Representatives as part of the impeachment inquiry into actions by Donald Trump, and many of the witnesses have provided clear evidence. But it has become obvious, more than ever before, that in turn, none of the facts being revealed will possibly change Republican support for the president. The witnesses’ testimony has nothing to do with the prospect of impeaching Trump and removing him from office.

Anyone following the hearings, which are being broadcast live on most U.S. news stations, will immediately be drawn by the nature of the questions that Republican representatives are directing at the witnesses. Those representatives, who are constitutionally granted the power of overseeing the executive branch, including the American president himself, do not ask a single question seeking facts about what happened or questions seeking the truth. All their questions are formulated in such a way that they imply a witness lacks credibility or knowledge about what really happened. Other questions seem not to be directed at the witnesses at all, but rather at the Democrats, accusing them of initiating impeachment proceedings solely with the partisan goal of toppling the Republican president.

In reality, of course, no facts that support a goal of toppling the president have emerged, only the ever-changing defense strategies for the Republican president. The facts that are being uncovered are being handled only by changing the president’s defense strategy. The Republican defense approach in general, and not just in Congress specifically, starts with a call to praise the president instead of opening an impeachment investigation. It then recognizes that mistakes were made, but asserts that these errors do not merit impeachment. Finally, the strategy ends up by claiming that Trump’s incompetence made him fail at achieving his goal, which if he had achieved it in the first place, would have warranted impeachment.

In their comments, some Republican representatives have implied Trump should be praised. They think that since the very start of his presidential term, Trump has been clear about his desire to reduce U.S. support for other countries, let alone a country whose current president admitted during his campaign that corruption is rampant. Trump asking Ukraine to investigate acts of corruption is laudable.

The defense and statements by Republican representatives outside the House hearing also made it clear that Republicans view actions by other figures in the administration, among them the president’s personal lawyer, Rudy Giuliani, as inappropriate and unacceptable. However, these actions do not require impeaching the elected president but rather they demand a less “extreme” step. Blaming the president is a congressional directive. Impeachment is a step that has been taken very rarely in American history.

But it is well known that there are Republicans who are not members of Congress who are not loyal to Trump, yet still oppose the impeachment proceedings. This is not because they support Trump, but rather because they assert that incompetence is not a constitutional basis for impeaching an American president. They say impeachment requires a finding that the president pressured a foreign country in order to achieve a personal goal unrelated to American foreign policy. But Ukraine did not yield to pressure to announce the desired start of an investigation that would implicate his political rival, Joe Biden, as Trump wanted. Because of Trump’s incompetence and his inability to achieve this goal at all, U.S. aid was not suspended pending Ukraine’s acquiescence to the pressure.

It has been clear in recent weeks that the Democrats’ performance is also not without partisan bias. As the sessions have progressed, it has become clear that the hearings have been carefully designed to first call witnesses whose testimonies offer limited evidence, before gradually moving toward witnesses whose testimony implicates the president. But the Republicans’ role is still the most important in terms of what will come of the whole process. Given severe polarization in the United States, there is no doubt that an overwhelming majority of Democrats will vote in favor of impeaching Trump, especially in the House of Representatives where they have the majority. Meanwhile, Republicans, who have the majority in the Senate, will not vote to remove him from office.