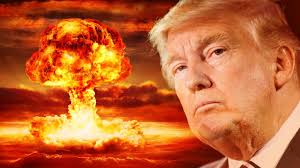 For almost three years, the Trump administration has made a series of major decisions aimed at withdrawing the United States from across the globe. The most important of these decisions range from reneging on the Paris climate agreement, to denouncing the Trans-Pacific Partnership Agreement, to abandoning the Iran Nuclear Deal, to withdrawing U.S. troops from Syria.

However, one decision stands out from all the others for its cataclysmic consequences for U.S. national security. This ill considered decision, which took effect Aug. 2 following a six-month warning, concerns the abandonment of the Intermediate-Range Nuclear Forces Treaty with Russia. This decision could prove to be catastrophic in the long term. Clearly, Russia is the big winner in this decision, getting an implied license to trigger a new nuclear arms race. For the rest of the world, the obvious consequence is increased insecurity internationally.

The INF treaty was negotiated in 1986 with Mikhail Gorbachev during the Ronald Reagan presidency. Both leaders grasped that the world would be a safer place with controls on intermediate-range nuclear weapons. Over time, the 1987 treaty came to be considered the most important nuclear agreement in history.

During the Cold War, despite the SALT I and SALT II nuclear agreements signed in 1972 and 1979 to limit the number of intercontinental ballistic missiles, control over nuclear weapons had reached a dead end. Peace rested on the doctrine of mutually assured destruction between the two countries. This dynamic discouraged the two powers from launching the first strike.

In the meantime, the situation became increasingly dangerous, as the United States and Russia intensified the deployment of intermediate-range nuclear missiles in Europe and Asia. Under the 1987 treaty, the two countries pledged to eliminate all ballistic missiles with ranges of between 500 kilometers and 5500 kilometers (approximately 310 miles to 3,417 miles) launched from the ground. In addition, with respect to the 16,000 warheads that each of the two powers possessed, the parties agreed to reduce the total number that could be deployed to 6,000. This treaty then enabled further reduction, reaching deployment of just 1,550 warheads in 2019.

However, for three years, each power accused the other of not respecting the treaty. Behind these accusations lies the development of far more formidable new weapons: a new generation of nuclear intercontinental ballistic missiles, nuclear powered hypersonic cruise missiles, underwater drones and other devices like hypersonic weapons that are capable of traveling nine times faster than the speed of sound and largely impenetrable to all existing anti-missile defense systems.

According to NATO Secretary-General Jens Stoltenberg, the abrogation of the INF Treaty, in spite of its limitations, signifies a “bad day for all of us who believe in arms control and stability in Europe." Effectively, the absence of this treaty allows the Russians to deploy new mobile nuclear missiles that are difficult to detect and able to reach European cities in just minutes.

Stoltenberg’s remarks were echoed by U.N. Secretary-General Antonio Guterres, who confirmed last August that with the repeal of the INF treaty "the world will lose an invaluable brake on nuclear war. This will likely heighten, not reduce, the threat posed by ballistic missiles."

Since the treaty imposed limitations on the use of nuclear weapons, abandoning it does not make the world safer by any means. On the contrary, this has paved the way for a new nuclear arms race without any concern for the consequences for one and all.

Accordingly, the United States’ closest allies have reason to question the meaning of America’s promise. In the face of the United States’ unpredictable and irrational behavior, many allies are questioning America’s vow to provide them with an umbrella of nuclear protection. Disturbed by the direction Washington is taking, European leaders are heading toward the creation of a European defense force.

Former NATO Cmdr. Wesley Clark has stated that with the repeal of this treaty, "we're going into a new competition, a military competition, including a competition with nuclear arms against development that Russia, and to some extent, China, are making."

The last thing the world needs is a new arms race with Russia. It took decades to sign the INF Treaty. The hasty and inconsiderate abandonment of this treaty leaves a significant void. Meanwhile, Washington is looking to stifle any sense that the responsibility lies with the United States for triggering a new arms race. But this assertion is being met with skepticism within the international community.

As if that weren’t enough, in October, the Trump administration declared its intention to ditch another crucial Cold War legacy. The Treaty on Open Skies, finalized in 1955 and ratified by 34 countries, allows member states to survey their respective territories unarmed and to verify arms control agreements. President Vladimir Putin could not ask for anything more than for the U.S. to repeal this treaty. Without a doubt, over the past three years, the world has become a much more uncertain and dangerous place.