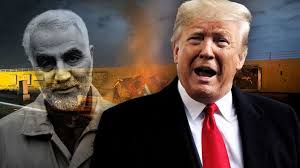 Since he became president, Donald Trump has taken many worrying steps in terms of foreign policy. He has insulted old allies and rubbed up against autocrats. He has unleashed a trade war with China and started a bromance with North Korean dictator Kim Jong Un. He terminated the nuclear treaty with Iran and withdrew from the Paris climate agreement. But what he did last Friday, eliminating the Iranian general Qassem Soleimani, is, without a doubt, the most disturbing action so far.

That the Americans wanted Soleimani dead, is, by itself, understandable. The Iranian leader was one of the most formidable enemies of the United States. As the architect of Iran’s foreign military activities, he was, after the American invasion of Iraq in 2003, responsible for defending Iranian interests. He showed himself to be a master at that. Soleimani made sure that Iran had great say in Iraq, and he expanded Iranian influence in Syria by keeping President Bashar Assad in place (with help from Moscow). He got his hands very dirty and did not spare Americans. The militias that Soleimani controlled in Iraq are responsible for hundreds of American deaths.

There Is No Proof

But all of that does not mean the Friday attack was therefore justified or wise. The question in terms of international law is whether the killing was acceptable. The Trump administration government claims to be in the right because Soleimani posed an “imminent threat,” as he was supposedly planning an attack which put hundreds of American lives at risk. But there is no proof and the intelligence justifying the attack that was sent to Congress is classified.

Further, the issue of proof exists irrespective of the question as to whether Trump’s actions were wise. His predecessors Barack Obama and George W. Bush, who carried out extensive elimination operations with drones, passed on eliminating Soleimani because they were concerned with the possible consequences of such an act. A country rarely kills such a high official from another country outside of wartime, and there is a reason for that: it closes down the path to negotiation and opens the path to revenge and escalation.

Trump might think that he will bring Iran to its knees with this extreme step, now that he has not succeeded in doing so with maximum economic pressure. But he mainly shows that he understands nothing of foreign policy or the Iranian regime. While the U.S. and Iran do not want a war, for different reasons, Trump has brought precisely that scenario a big step closer with his reckless action.