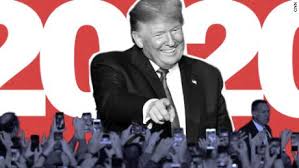 Domestic policy success is likely to encourage the 45th president of the United States to make bold foreign policy decisions.

Americans have always reelected a wartime president when the U.S. economy remained stable during a reelection year. Throughout the three years of Donald Trump’s presidency, the U.S. economy has been growing by more than 2% and will probably continue growing up until November 2020, while the rate of unemployment has steadily decreased. Thus, the only opportunity for Trump’s opponents to prevent his reelection is to convince undecided American voters that Trump is unfit to be president.

During the impeachment proceedings in the House of Representatives, initiated by the Democrats, which ran from September to December, everyone recognized that Trump tried to condition military aid to Ukraine on the investigation of a potential conflict of interest involving Hunter Biden, son of the former Vice President Joe Biden, one of Trump’s most serious rivals in the upcoming elections.

However, after three months of hearings, the number of people supporting Trump’s impeachment did not exceed 50 percent. The majority believes there is no evidence of wrongdoing and no reason to continue the proceedings. The argument about the importance of supporting Ukraine to constrain Russia, a major violator of the international liberal order, might be common within the U.S. foreign policy establishment, but it is not yet obvious to the American public. On the other hand, many voters favor pursuing the inquiry, including a thorough investigation of all the evidence by the Senate. Yet, it seems clear that regardless of the proceedings, Trump is not going to be convicted on impeachment charges by the Senate’s Republican majority.

This could mean that Trump, who now hopes to get reelected largely on the basis of continued national economic growth, is not going to get involved in any foreign policy adventures.

Despite the novelty of Trump’s approach to foreign policy, he has been mostly unwilling to participate in direct military confrontation, the consequences of which would be difficult for Washington to deal with. Trump has exerted severe pressure on Iran, imposed tariffs on China and demanded increased contributions from European and Asian allies for joint defense. However, it looks as though Trump believes that he has discretion to manage the level of tension in each one of the conflicts and avoids any uncontrolled use of force. In September 2019, for example, he decided not to take military action against Iran following attacks on Saudi oil facilities, which Washington quickly blamed on Iran.

Trump repeatedly offered to negotiate with Kim Jong Un and met with the North Korean leader three times between 2018 and 2019. Furthermore, Trump has suggested meeting in person with Iran’s leaders with the belief that this will help the two countries reach a deal. Trump has also avoided escalating a conflict with China. And Trump now reportedly has doubts about his January 2019 decision to recognize the president of the Venezuelan National Assembly, Juan Guaido, who was serving as interim president of Venezuela, because Guaido failed to mobilize the Venezuelan population against the regime of Nicolas Maduro. Finally, despite his earlier criticism of NATO, Trump supported the alliance during the NATO summit in London in December 2019, after French President Emmanuel Macron expressed doubts about NATO’s efficacy.

Trump now finds that it is crucial to avoid further escalation of the trade war with China so as not to provoke a recession and irritate American exporters, especially farmers who are now suffering from the tariffs China has imposed on agricultural products. Trump would also prefer to prevent a major foreign policy crisis that could emerge if North Korea tested a long-range ballistic missile or if a new conflict in the Middle East broke out, similar to the drone attack in Saudi Arabia. However, it does not look as though either Iran or North Korea is willing to exacerbate tensions, and Trump is not going to provoke them.

Trump’s moderate approach does not necessarily mean he is going to be passive, especially since he tends to press his point in every argument with his opponents. There have been at least two domestic policy developments that will motivate him to be even more innovative in foreign policy: the fact that Special Counsel Robert Mueller found no evidence that the president committed a crime and the fact that the attempt of the Democratic Party to remove him is likely to fail.

Trump is already sending the Russian president positive signals. For example, the White House has strongly opposed DASKA – the “sanctions bill from hell.”*

The Trump administration is pushing back against any further sanctions against Russia, even those that would be imposed if Washington accused Russia of potential interference in the 2020 U.S. presidential election. It is possible that the Trump administration is going to offer Moscow a series of deals related to arms control and with respect to Russia’s relations with China, Iran and North Korea. Moscow is probably going to refuse all of them since it believes that the United States is losing its strong position in international relations, so if Russia waits a bit longer, it could hope for more beneficial terms.

Combining pressure with calls for compromise, Trump will seek deals with world leaders, who, in Trump’s opinion, are able to achieve remarkable results despite confrontation with opponents. Apart from Russian President Vladimir Putin, those leaders probably include Saudi Crown Prince Mohammed bin Salman, Israeli Prime Minister Benjamin Netanyahu, British Prime Minister Boris Johnson, Chinese President Xi Jinping and even the supreme leader of North Korea, Kim Jong Un. However, the U.S. president will not be able to build a coalition with such a diverse group, and, at the same time, most of them are going to individually reject Washington since Trump has not been unwilling to compromise. Traditional allies of the United States in Europe and Asia are going to be torn between how to respond to America’s unilateral actions, such as sanctions against the Nord Stream 2 pipeline, on the one hand, and the necessity to work together on the crucial issues of international security and maintaining strong economic ties with the most powerful country in the world, on the other.

*Editor’s note: DASKA is an acronym for the Defending American Security from Kremlin Aggression Act of 2019, bipartisan legislation that seeks to increase economic, political and diplomatic pressure on the Russian Federation in response to Russia’s interference in democratic processes abroad, malign influence in Syria and aggression against Ukraine, including in the Kerch Strait.