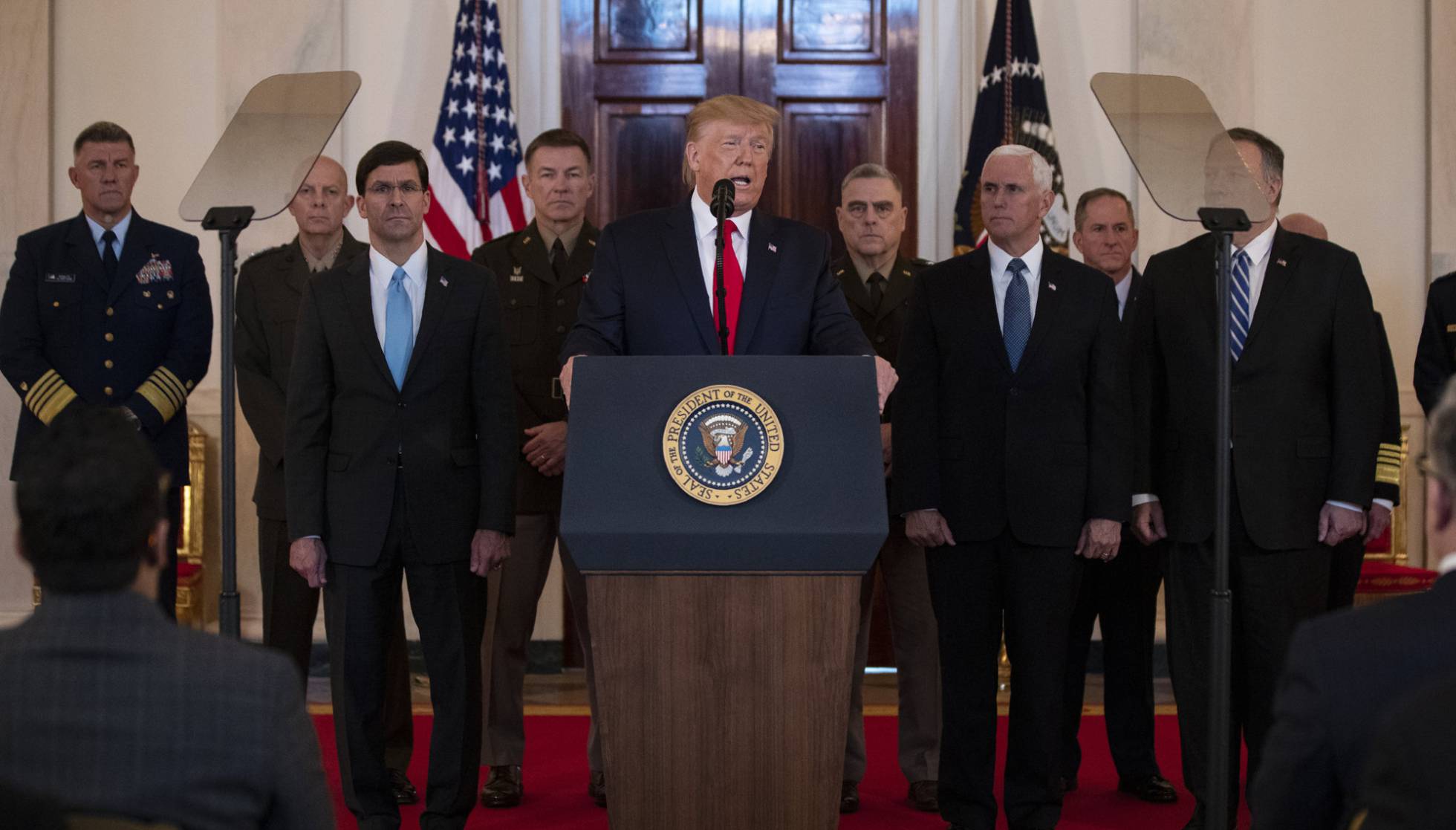 Trump scorns diplomacy and chooses to intimidate his allies.

Donald Trump is completely right about at least two things. Qassem Soleimani had blood on his hands, and the issue is not whether we feel sorry he’s gone. And Iran should not get hold of a nuclear weapon, because this represents a danger to the region and a terrible example of nuclear proliferation. However, Trump was not right when it came to ordering the assassination of the Iranian general, going against not just international law but also an executive order prohibiting the assassination of political enemies signed decades ago by Ronald Reagan.* And Trump was not right when it came to choosing a unilateral method to stop Tehran from managing to become a nuclear power. Nor was he at all right when yesterday, oblivious to good practices and customs in international relations, he rudely demanded that the Atlantic alliance, the main European countries, and even China and Russia give in to his chaotic strategy of bullying and harassing Iran, and abandon the Iranian nuclear deal that has, so far, made it possible to halt the Iranian nuclear program.

Soleimani was the second most powerful member of a dictatorial and dangerous regime, but he was not the head of a terrorist group, which is how Trump described him yesterday in his solemn and somber speech at the White House. Taking his life is an act of war. The only precedent is the downing of the plane that was carrying Adm. Isoroku Yamamoto — responsible for the destruction of America’s entire Pacific fleet in a surprise airstrike on Pearl Harbor — in the middle of World War II. Nor should anyone invoke the dubious legality of George W. Bush and Barack Obama’s selective killings carried out as part of the global war on terror, which took the lives of the leaders of forces defined precisely as non-state actors.

Nothing can justify the escalation on either side. Not the escalation by Iran, with its missile attacks in Iraq and the Persian Gulf. Not the escalation by the United States, with this assassination of an Iranian leader in response to the attack on U.S. Embassy facilities in Baghdad. The move was clearly disproportionate, and there was insufficient consultation with Washington security agencies, much less European allies, beforehand. In return, the European Union, along with the countries that have signed the nuclear deal with Iran, should — instead of following Trump’s inappropriate and abusive orders — ask both sides to cease the escalation and put an end to this highly serious clash, before it becomes an open and uncontrolled war.

Two issues are causing particular concern in Europe. The first is the resumption of the Iranian nuclear program, not just because of the danger it represents in and of itself, but also because the destruction of an agreement so painstakingly crafted is a defeat for multilateralism and a setback in global nonproliferation policies. The second issue is the possibility that the terrorism of the self-proclaimed Islamic State, which Iran, and even the assassinated general, Soleimani, had dedicated significant efforts to fighting against, could make gains. That’s why the EU should devote its energies to both fighting the Islamic State group and convincing Tehran not to bury the multilateral nonproliferation agreement.

The White House, leaning in exactly the opposite direction, has complemented the president’s statement by taking an unjustifiable step that is at odds with its international commitments: denying a visa to the Iranian foreign minister, Javad Zarif, to stop him from attending the U.N. Security Council meeting in New York. This decision precisely limits the only tool capable of resolving the conflict — diplomatic action — and is a further indication of the terrible path taken by Trump in the face of this crisis. The unilateral turn taken by the White House, alien to international law and carried out behind the backs of even diplomatic institutions and American military intelligence, represents a danger to peace in the Near East. This danger calls for urgent action, and leadership by the EU in particular.

*Editor’s note: Ronald Reagan issued Executive Order 12333 which provides that no person employed by or acting on behalf of the United States government shall engage in, or conspire to engage in, assassination.