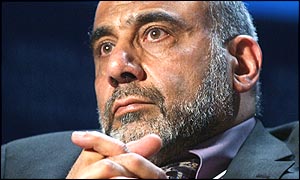 When Adil Abdul Mahdi became prime minister, he inherited a country that had been on the verge of collapse for the past five years. Yet in spite of that, he managed to administer his government in a remarkable manner. He possesses a long-term economic mentality, and the signs of his success won’t be seen for several years at least. Above everything else the prime minister has done, he has constructed a state truly removed from foreign influence. But how did Adil fall, and why did his plans to build the Iraqi state fall with him?

The economy is the cornerstone when building a nation. What happened in 1968, during Abdul Rahman Arif's administration, resembles what has recently happened with the resignation of Abdul Mahdi.

Arif granted the French state oil company ERAP an immense petroleum concession in southern Iraq, as a prelude to canceling a sulfur concession for an American company in the north. He formed oil agreements with the Soviet Union and Poland, all while in partnership with the national oil company, as well as purchasing dozens of French Mirage aircraft.

All of this contributed greatly to the revitalization of the Iraqi economy, from which, in turn, Iraq would free itself from the stranglehold of foreign intervention into its internal affairs. But as soon as these agreements were signed, everyone was shocked by the fall of Arif’s government in an episode all too similar to yesterday’s affair with Abdul Mahdi, who resigned for the following reasons.

A $500 million deal was struck with China, to be paid in the form of 100,000 barrels of oil every day for a period of 10 years (both of which figures can be extended). During this period, Chinese companies will be responsible for Iraq's reconstruction in various respects; a comprehensive account of any one of these aspects lies beyond the scope of this article. This Chinese deal comes following the agreement made with the German company Siemens on the rebuilding of Iraq’s power infrastructure.

It’s an open secret that American interference in Iraq put pressure on Mahdi not to make these sorts of deals, and against building up the Popular Mobilization Forces (al-Hash al-Shaabi). In response, he incorporated the PMF into the honor guard, used for welcoming presidents and leaders to the country. Was this diplomatic response from Mahdi what compelled Uncle Sam to stoke the political and popular flames of discontent in order to oust the prime minister?

Mahdi's only faults were his initiating the Iraq Reconstruction Agreement, which will pull the “economic rug” out from underneath the Emiratis, and ending the foreign interference of Uncle Sam in Iraq. These two moves gave each of the slighted parties the motivation to mount increasing negative political pressure on him and to fuel demands from the street and dissenters for his dismissal.

The genuine state we’ve long dreamed of was so close to becoming a reality, but some are more than happy with the status quo. They work hard to sustain this “on-paper” state we find ourselves in today ... just how they wanted it.