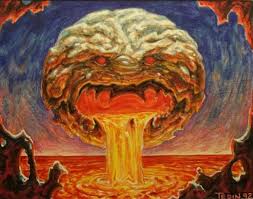 It is believed that in April 2018, the world witnessed the birth of a new political meme: “highly likely.” This particular phrase was used by the prime minister of Great Britain, Theresa May, while accusing Russian secret services of poisoning the fugitive Russian intelligence officer, Sergei Skripal, and his daughter. Since then, “highly likely” has been used in relation to an event of which there is not 100% certainty, but for which existing indications allow for the suggestion that something has happened.

Back then, some members of the media community used this meme, some made fun of it, but nobody took it seriously. But this was in vain! Because “highly likely” is not a neologism, but a concept that has been used for a long time, in a fully-fledged and murderous way. Let’s remind ourselves of Colin Powell: During a United Nations conference, the American secretary of state shook up a vial containing some kind of white powder and said that it was anthrax that was being developed by Iraq. And that was that: On March 20, 2003, the American invasion of Saddam Hussein’s Mesopotamia began.

The country was destroyed, Saddam was hanged, almost 2,000 Americans and hundreds of thousands of Arabs were lying in the Iraqi sand, but the facilities “for preparing anthrax”* had not been found. In Sept. 2005, Powell himself confessed his actions, calling his UN speech a “blot” on his record, which undoubtedly made it a lot easier on all the victims.

Essentially, this was already an application of the “highly likely” method. The vials themselves were an open act of deception, but at the core of the U.S. actions, besides the fury at 9/11, was a deep conviction that Iraq MIGHT possess and be using weapons of mass destruction. This conviction was so deep that they didn’t need any evidence. It was enough to have a narrative.

However, Powell’s pragmatic narrative transformed relatively quickly into an academic doctrine regarding “the scope of a state’s right to self-defense against an imminent or actual armed attack” from non-state actors. The doctrine was developed by Sir Daniel Bethlehem, Queen’s Counsel and recipient of the Order of St. Michael and St. George.

Since then, the concept has often been called the “Bethlehem Doctrine of Pre-emptive Self-Defense.” Theoretically, this was a recommendation to the government to “work to establish a clear international consensus on the circumstances in which military action may be taken by states on a pre-emptive basis.” One such, if not the key, circumstance, according to the Bethlehem Doctrine, is “imminence.” “Imminence” gives a state the right to “pre-emptive self-defense,” but an attack could be considered “imminent,” even if the details or timings of it are unknown.

Such “imminence,” which doesn’t demand evidence, in no way differs from the “highly likely” concept, as it implies “suspicion” of an attack and even a “sense” of an attack, and the doctrine itself was specially developed to justify these types of attacks. That is, it “has been the formal legal justification for drone strikes and targeted assassinations by the Israeli, U.S. and U.K. governments for a decade.”

And this is not a theoretical investigation, but a concrete “instruction for application.” On Jan. 3, while justifying the murder of Iranian general Qassem Soleimani, U.S. Secretary of State Mike Pompeo declared that this assassination disrupted a “series of imminent attacks.”

The word “imminent” was used in the Bethlehem context, and so it was useless to ask Pompeo: What, where, and when were these “imminent” attacks planned for? Killing the general seemed enough for the U.S. based on the feeling that he was, possibly (it was highly likely?), planning on doing something.

It is believed that the Bethlehem Doctrine “has not gained widespread acceptance - or indeed virtually any acceptance - in legal circles outside the ranks of the most extreme devoted neo-conservatives and zionists [sic],” but nobody is interested in the opinion of highbrow intellectuals. It has gained acceptance in practice, having been placed as a result of Secretary of State Mike Pompeo’s statement into the official political stance of the U.S., and, by extension, into that of Great Britain and Israel as well.

Moreover, the doctrine has not only gained acceptance, but it has also been developed. Because the Bethlehem Doctrine was connected to, um... “countering” non-state actors. But Soleimani was a general, a state actor and a plausible candidate for the post of the president of Iran. In Iraq, where he was killed, Soleimani was a guest of the Iraqi government with whom the U.S. government was associated.

What that leaves us with is the arrival of an era of the legal murders of competing political leaders. More precisely - political executions. Welcome!