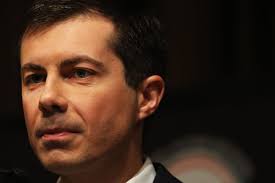 Pete Buttigieg won the first Democratic caucus in Iowa. It was a big surprise. He could repeat that victory in New Hampshire. Whether he will also succeed in Nevada and South Carolina remains to be seen.*

For a long time, 38-year-old Pete Buttigieg lagged firmly in the polls behind the three septuagenarians Joe Biden, Bernie Sanders and Elizabeth Warren, who seemed to decide among themselves who would become the Democratic presidential candidate. For a long time, he was therefore affably tolerated in that company as the smart and sometimes slightly insufferable little nephew, who gets to speak every now and then.

But surprisingly enough, since Buttigieg won the majority of the delegates at the first caucus in Iowa, and now that he appears to be in a fight with Bernie Sanders to win again in New Hampshire on Tuesday, the tone has hardened. Joe Biden launched a ruthless campaign ad in which he mocks Buttigieg’s provincial political experience, noting that while Biden closed the Iran deal as vice president, Buttigieg, as mayor of the medium-sized city of South Bend, Indiana, installed decorative lighting in the park.

The confrontation between the two was inevitable, as both are seen as “moderate” candidates who can offer resistance to the radicalization of the Democratic Party, and who could thus be attractive to voters in the middle.

Biden is still the favorite in national polls, but there are concerns about whether the 77-year-old veteran still has the mental acuity to be president. The contrast with Buttigieg is big: the latter is quick-witted and eloquent, reportedly in seven languages. The fact that he is openly gay could lend his candidacy a historic aura for Democratic voters.

But many left-leaning activists think he is too smooth and too moderate. He was a consultant for the McKinsey consulting firm and he has received donations from 40 billionaires. “That is precisely the problem with American politics,” Sanders underscored once again last week.

In turn, Buttigieg’s followers claim that even though he is considered a moderate within the current Democratic Party, his platform is still considerably more leftist than that of Barack Obama or Bill Clinton. Accordingly, Buttigieg wants to introduce a $15 minimum wage and a carbon dioxide tax, and secure a stronger position for the unions by introducing collective bargaining agreements. Nor is he, like Biden, under any illusion that America can simply go back to the good old times in which Democrats and Republicans worked well together. He wants election reforms that would break the power of the Republicans.

The biggest problem for Buttigieg is that he has trouble attracting black voters. This is not really a problem in the white states of Iowa and New Hampshire, but in the other two states with early primaries – Nevada and South Carolina – Sanders and Biden have a major lead, respectively. Biden rubbed it in once again in his campaign ad, noting that while Biden was ushering several important laws through Congress, Buttigieg fired the first black chief of police in South Bend.

*Editor’s note: Sen. Bernie Sanders was declared the winner in the New Hampshire primary on Feb. 11.