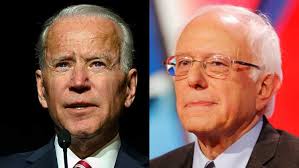 The leftist senator from Vermont wanted a revolution. What he got was election losses. After the latest primary results, Joe Biden is likely to be the candidate to defeat Trump.

The Democratic Party’s presidential nominee for the November election is likely to be Joseph Robinette Biden Jr. This is almost a certainty after the most recent primaries. On Tuesday, after six elections in important U.S. states, the former vice president won just like he did on Super Tuesday one week ago.

It is quite conceivable that Bernie Sanders, Biden’s last remaining opponent, will keep going anyway. Maybe he and his supporters are convincing themselves that they can still achieve something in the coming elections.

However, election results so far speak against that and prove the contrary: Democratic Party supporters who have cast their votes throughout the country in recent weeks made a decision that leaves little doubt in terms of clarity – a decision for Biden.

Sanders misjudged matters in two respects. After decades of almost unbridled financial capitalism crowned by three terrible years of Donald Trump’s administration, he believed the U.S. was ready for a leftist revolution.

He also believed the Democratic Party was ready to make him the standard bearer for this revolution – like they nearly did in 2016, when he was running against Hillary Clinton and narrowly lost. However, neither was the case.

Sanders Could Not Even Convince the Democrats

Most Americans are fed up with Trump, his chaos, drama, incompetence and rush to judgment. This applies even more in the current coronavirus crisis where chaos and incompetence could cost many lives. And most Americans can see that inequality has reached obscene proportions in their country. But that doesn’t mean they want to change the whole economic, political and social order, like Sanders has promised.

Sanders could not even convince the Democrats. Some of the people who still voted for him (or voted against Clinton) in 2016 have now defected to Trump.

The vast majority of remaining Democratic voters, however, have chosen the candidate who, in their opinion, is in the best position to defeat Trump. That is the main objective for Democratic Party supporters. Everything else, all the plans, programs and grandiose promises, are merely an accessory and ornamentation, political tinsel.

In the end, it was just too risky for most Democrats to support a campaign headed by the self-proclaimed democratic socialist Sanders, and they are probably right.

That doesn’t necessarily mean Biden is the right man to defeat Trump. He has his own problems and weaknesses, which will become very important in the coming months. To put it politely, at the age of 77, Biden might not be the politician and campaigner he used to be 20 years ago, and might still have been four years ago. That is obvious and well known.

It is why, one year ago, a good part of the Democratic establishment still had high hopes for Elizabeth Warren. It was only when her candidacy collapsed and Sanders took the lead that the politically moderate wing gathered increasingly behind Biden. The motto became it’s all right as long as it’s not Bernie, even if we have to go for Biden, meaning that Biden is more of a stopgap solution than an ideal candidate.

Republicans have already begun a campaign painting Biden as a senile and demented old man. Some of Sanders’ supporters have enthusiastically participated in this witch hunt, demonstrating how deep the gap is within the party between Sanders’ left wing and Biden’s politically moderate wing, and showing how great the mutual contempt and distrust have become.

If the Democrats want to win the presidential election in November, they must not waste any more time and energy on intraparty disputes. They have to pull themselves together and concentrate on the real mutual enemy: Trump.

The best service Sanders could render the Democratic Party − and America − would be to give up and support Biden.