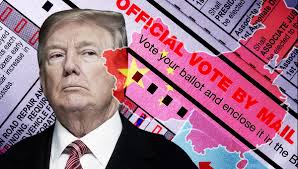 As a result of the coronavirus outbreak, there is a rising demand to allow voting by mail in the November election. Republicans are against it: they know that voting by mail would benefit the Democrats.

Alongside the media’s coverage of the policies Donald Trump has promulgated against dealing with the pandemic and the role that state governors play in combating the virus, one question has become increasingly important to America politics in recent days – what should happen in the event that the coronavirus is still considered a threat to public health in November? Will it be possible to hold democratic elections when most of the electorate will not actually be going to the polls to vote? And if it is possible–how?

Some states only allow absentee voting for voters who are physically unable to vote in-person: people who are sick, handicapped, living abroad, prisoners who have not committed serious crimes, and others. Other states allow everyone to vote by mail, without needing to have any particular reason for doing so (no-excuse absentee voting). A third group, made up of five states (Washington, Oregon, Colorado, Utah and Hawaii), offers voting exclusively by mail, and has no option of voting in person whatsoever.

With the outbreak of the coronavirus, representatives of voting committees all over the United States (a voting committee is a public entity that every voting district establishes in order to organize and supervise voting) began calling on the government to allow voting by mail and to remove any legal or bureaucratic blockades that could prevent people from voting. The responsibility to implement such actions lies first and foremost in the hands of the state legislatures, which need to draft laws pursuant to these goals. As of now, very few legislators have taken serious action on the issue.

On Capitol Hill, where the U.S. Congress meets, some have proposed taking action at the federal level. At the end of March, when both parties were discussing the stimulus package, Democrats proposed that states allow all citizens to vote by mail, and that states facilitate the registration process for voters to vote by mail. Democrats also proposed allocating $4 billion to election committees across the United States to help fund the necessary changes.

The Democrats’ initiative was ambitious, but fierce opposition from both the Republicans and Trump himself completely blocked the Democrats’ efforts. The final draft of the stimulus package signed by Trump on March 26 did not include any concrete instructions to states to change the electoral process that they already have established.

The Republicans’ effort to block voting by mail–voting by mail being the most reasonable solution to the challenges that are expected to arise this coming November–may seem surprising at first. However, looking at Republicans’ past statements and opinions on the subject makes things much clearer.

I Do Not Want Everyone To Vote

Over the past few decades, Republicans have passed a series of laws across every state that have restricted many citizens’ ability to vote. The most well known of these laws are the voter ID laws. Voter ID laws require voters to present a form of identification with a matching photo at the voting location. Because there is no universal form of ID in the United States, and because many citizens from underprivileged backgrounds do not have a passport or driver’s license with a photo, many citizens who have the right to vote do not because of the extra burden that issuing a special voting license would demand.

Occasionally you can hear Republican officials suggesting that these laws were actually implemented for a different reason entirely. The most famous incident occurred in 2012. Pennsylvania state House Republican leader at the time, Mike Turzai, referred to the Voter ID law passed in the state as a law “which is going to allow Governor Romney to win the state of Pennsylvania.” Turzai made this statement in a closed meeting of Republicans and did not know he was being filmed.

It is important to understand Turzai’s statement within the broader context of voting patterns in the United States. Liberals and conservatives alike estimate that when voter turnout is high, Democrats are likely to see impressive results in their favor. On the other hand, when voter turnout is low, Republicans are likely to benefit from the lack of turnout. This is because young voters, voters from minority groups, and voters with low income, who have historically voted for Democrats, are the most likely to forego voting should it mean missing precious work hours; Election Day in the United States is not a national holiday.

With high voter turnout favoring Democrats, Republicans have emphasized for many years

that high voter turnout is not necessarily positive. Republicans say that encouraging

though voter fraud is something that rarely happens. “I don’t want everybody to vote,” said

Paul Weyrich, a prominent conservative activist and one of the founders of the conservative

Heritage Foundation think tank. “Elections are not won by a majority of people. They never have been from the beginning of our country, and they are not now.”

No Republican Will Win

Here is where voting by mail enters the picture. Data indicate that countries which have

allowed voters to vote by mail have seen a significant increase in voter turnout.

application to voters by mail, rather than waiting for every voter to submit a formal request to

receive a ballot. The increase in voter turnout was also bolstered when the state allowed

voters to register to the registry of able voters and vote at the same time. Many human rights

activists in the United States have called on the government to adopt voting by mail, even

before the outbreak of the coronavirus, because of these reasons.

Considering the impact voting by mail would likely have on voter turnout, it is not surprising

that Republicans are against it. During a White House press briefing last Saturday, Trump

permitted, and that he prefers voting in person with an ID. During an interview with Fox

News a few days prior on March 30, Trump said that if voting by mail were implemented as

proposed by the Democrats, it would lead to such high voter turnout that no Republican candidate would be elected again.

David Ralston, the Republican Speaker of the Georgia House of Representatives, said that

conservatives in his state. A few days later he said that he was referring to voter fraud, which,

according to him, would increase as a result of permitting voting by mail.

The Calculated Risk of the Republicans

Is Republican opposition to voting by mail a mistake? The elderly are more likely to vote

Republican, but they are also a demographic to which that the coronavirus poses a particularly serious risk. Many of the elderly will likely not go out to vote for fear of contracting the virus, but they may also not vote by mail because of the complicated bureaucratic process that voting by mail currently entails. This situation is likely to be a detriment to Republicans in the upcoming elections.

The answer to this question consists of two parts. First, some Republican officials believe

that the problems the coronavirus poses are only relevant in large cities. In rural parts of

the country where many conservative voters live, people will not be afraid to go out and vote.

Second, Republicans understand that if the proposed changes to the voting process are passed, there will be no way back; voters will continue to support voting by mail, and legislators, who were elected as a result of voting by mail, will work to ensure that the laws stay in place.

Despite this, Republicans recognize the negative impact not allowing voting by mail could have on voter turnout in their most important age bracket. Therefore, Republicans have

but not to younger voters. The Democrats are not expected to accept this proposal. The

Republicans will need to decide soon which risk they can sleep better with at night: a rise in

voter turnout, or older voters not voting on election day.

In any case, time is ticking. Any changes to the existing voting regulations would entail a huge

accordingly. If there is no breakthrough in the next few months, both parties will need to devote considerable resources in instructing their constituents on how to vote by mail under the current regulations – resources that will come at the expense of traditional voting propaganda.

If the ability to vote is not expanded through allowing voting by mail, voter turnout is likely to

fall dramatically compared to previous years. The implications that such a decrease would have

on election results are not clear at this point in time.