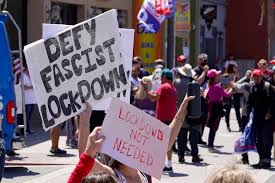 Factions on the far right, with the encouragement of the White House, have been instigating protests against the stay at home orders and business closures that were implemented to prevent the spread of the coronavirus. As expected, they found a way to blame the Jews for the current situation, which included using the Nazi slogan “Arbeit Macht Frei” on signs at protests.*

More than other crises over the past century, the coronavirus has unleashed dangerous waves of anti-Semitism across the United States. The deep divisions that separate American society are growing and will not be resolved easily in the next few years. The virus, which has already killed countless American citizens and will kill many more, is mercilessly ripping through the fabric of the American public and is aided by neo-Nazis, armed radicals that support civil war, and others who identify with them.

During World War II, the United States imprisoned hundreds of thousands of citizens of Japanese descent in internment camps. The 9/11 attacks unleashed a wave of hatred against Muslims. During both of these crises, however, the majority of U.S. citizens were unified around national leadership. There was widespread belief that the policy decisions taken against the Nazi enemy 80 years ago, as well as those taken against radical terrorists 20 years ago, were just. There was a national consensus that there was a need to share the burden and to sacrifice.

The United States of 2020 however is full of intersecting interests, divisive beliefs, bitter animosities and serious doubts about national leadership and the direction in which it is trying to lead the nation. These divisions did not appear with the outbreak of the coronavirus – they appeared three years earlier, with the election of Donald Trump as president of the United States. When the first groups of patients infected with the coronavirus showed up at emergency rooms across the country, the United States was already a country made up of two groups of people: those wanting to replace the president and those hoping he stays in power.

The difficult reality of the virus, and especially the harsh economic crisis it has prompted, are deepening the divides within American society. During World War II, there were few Americans who doubted the existence of Adolf Hitler and the threat he posed to global freedom. At the beginning of the 21st century, few Americans doubted the need to take the head off of the Islamic terrorist movement. Today, however, there is no national consensus on the threat that the coronavirus poses, nor on what steps should be taken in order to neutralize the threat.

Many of Trump’s supporters see the coronavirus as nothing more than a seasonal flu and are furious over the closures and other restrictions that many states have imposed to combat it.

Extremists Are ‘Dressing Up’ for Protests

From the extremists’ point of view, the struggle is not only against the current economic crisis but is meant to protect individual freedoms from tyrannical local authorities. They are not only against the closure of stores and restaurants. They are also against using face masks because they believe the authorities should not dictate how they behave or what to do with their bodies. As a result of the crisis and the protests in response to it, Trump’s “base” has grown stronger as we approach the upcoming election. The president has been calling on his supporters to “liberate themselves” from the oppressive restrictions imposed by state governors (the Democrats, obviously).

Neo-Nazis have also entered the picture. Neo-Nazis have been an integral part of Trump’s base, as we saw in the neo-Nazi outbreaks that took place in Charlottesville, Virginia, in 2017, where they shouted slogans like “Jews Will Not Replace Us,” and “Heil Hitler.”

During recent demonstrations in Chicago, one protester was seen carrying the sign “ARBEIT MACHT FREI, JB” (“work sets you free”). This slogan appeared at the entrance to the Nazi concentration camps in Auschwitz. The letters “JB” refer to Illinois’s governor, J.B. Pritzker, who comes from a family of billionaires that control the Hyatt hotel corporation, among other things.

Pritzker belongs to a group of Democratic governors that have refused “to open” their state’s economy as long as there is no decline in the number of new infections and deaths from the virus. Pritzker is a common target of attacks and criticism from Trump. The usage of this Nazi slogan attracted fierce criticism from the Auschwitz Museum, which released a statement saying that “It’s a symptom of moral and intellectual degeneration.” The protester carrying the sign claimed that she was not a Nazi and that she has Jewish friends, according to a tweet from someone who bothered to talk with her.

The slogan “work sets you free” is one of a number of anti-Semitic slogans that have plagued the protests against the closure of state economies. Photos of a demonstrator carrying a poster with the words “Heil Pritzker” and a swastika drawn on it have been circulating on the internet. Another sign carried the message “Heil Whitmer” (which referred to Michigan Gov. Gretchen Whitmer, the protesters’ No. 1 enemy). A different protester carried a sign with a drawing of a rat and the Star of David, with the words “the real plague.” The conspiracy theory that Jews control the biology labs in Wuhan, from which the virus spread, is popular on far-right websites.

Trump did not create the Nazi movement in the United States; it existed before his presidency. However, his election gave it momentum. This November’s election will decide whether it crawls back into the hole it came from.

*Editor’s note: Arbeit macht frei is a German phrase meaning “work sets you free.” The slogan appeared on the entrance of Auschwitz and other Nazi concentration camps.