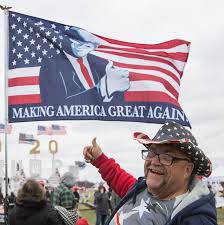 Certain American states are really pressure cookers these days. From Arizona to Texas and Idaho to Michigan, there are "patriots" occupying symbolic sites, attacking journalists, intimidating health care workers, insulting people who wear masks as fear mongers, etc., as if the virus were nothing but a political issue!

According to Madeleine Albright, however, had this crisis been managed differently, there would be another state of affairs. It's rather like 9/11, when Americans waged a fight against an evanescent enemy and fear gripped the land since no one knew where the next blow might come from, perhaps a nuclear bomb or biological warfare? Just like 19 years ago, this break will define the world before this disaster and the one after. In attitudes. In international relations.

Yet even if the majority of Americans are cooperating with the management of this crisis, in this case, stay-at-home orders, any similarity to 9/11 stops there. Instead of rising in popularity like his predecessor George W. Bush in 2001, the current president is falling in the polls. According to Real Clear Politics, 58% of Americans think their country is going in the wrong direction, and 53.4% disapprove of the handling of the coronavirus crisis.

Instead of bringing people closer together, Trump is driving them apart, calling for rebellion in Michigan, liberation for Virginia and freedom in Pennsylvania. This week, he supported the suspension of the Michigan legislature in order to prevent armed protesters from breaking into the Capitol building. He also favors intervention by armed militias in Texas to force businesses to reopen, claiming he is protecting law and order. He erodes the stay-at-home policies of certain states as neighboring ones opt for reopening. These disagreements at the highest levels, combined with the president’s rejection of scientific evidence, feed conspiracy theories that float around in the air like contagious particles. These theories, which date back to the early years of the American republic, have been documented. They illustrate a major cultural feature of Americans, one that historian Richard Hofstadter noted in 1964 as "the paranoid style in American politics." Sometimes amazing or disconcerting, and sometimes amusing, such theories are most disturbing when they are near the center of power, as with McCarthyism. But generally, the creators of conspiracy theories are on the fringes, where they are lightly mocked and seldom feared.

3 Factors that Change the Situation

First, there is the social context. In the anxiety ridden post-9/11 world, with a society scarred by a financial crisis in 2008 that plunged many Americans into a permanent precarious position, and where the whole social structure, including family, religion and demography is rapidly changing, these theories make everything overly confusing. These factors give meaning to incompetence and interfere with clear decision-making.

Next, there is America's growing polarization. As the political center gradually shrinks, the major parties are no longer the large umbrella groups they used to be, but now align according to ideology and values which erase previous regional differences. Thus, the line between "viral truth," which claims that the coronavirus danger is exaggerated, and "liberal bias," which holds that people may have to stay at home for a long time, stretches along the same partisan fracture as the rest of American society, extending from the local level up to Congress. And a study by the Harvard Kennedy School’s Misinformation Review finds that these differences are abetted by people's preferred media sources, such as the conservative Fox News, which claims that COVID-19 is being used by opponents to damage President Trump.

Finally, there is the president himself. The fact that he repeatedly tweets conspiracy theories, such as the idea he spread this week that California’s 25th Congressional District election was partly stolen, or his vague hints at "Obamagate," turn previously marginal notions more mainstream. These include white supremacy, which has gained steam during Trump's presidency during which more people have died in America as a result of the far right's racist and anti-Semitic terrorism than from Islamic terrorism.

Rather like members of the tea party in 2009, the groups that are mobilizing against social isolation measures benefit from Trump’s support, be it the conservative fortunes of the DeVos and Durr families, his Fox News mouthpiece, as well as parasites like Alex Jones with his InfoWars, or the fact that they join with those who fear a racial civil war, with militias, with pro-gun lobbies and with anti-government and anti-vaccine groups.

These people are increasingly coming forward more openly, with ever less fear of public criticism. In an election year, this development, along with the decline in the legitimacy of American institutions, might therefore lead to spiraling tensions whose outcome cannot be predicted.