Something profoundly sullen has risen to the surface over the course of Obama’s two terms in office. 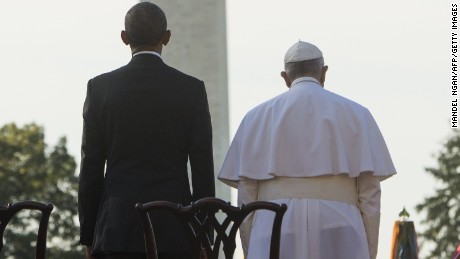 Despite all the lip service about the separation of church and state, politics and religion mix freely in the U.S. And by religion, I mean Christianity.
The United States Supreme Court may have legalized same-sex marriage, but Kim Davis is obstinately refusing to issue marriage licenses for gay couples.
She is Kim Davis, and her name is now known throughout America. For some, she's a martyr; for others, she's a misguided extremist. Kim Davis, a Rowan, Kentucky county clerk, refused to issue marriage certificates to gay couples even though they are permitted to marry under United States law. An Evangelical [Read more]
The decision of the Supreme Court of the United States was a tight one: 5-4 in favor. As several commentators have pointed out, the male magistrates voted 2-4 against, while the female magistrates voted 3-0 in favor. Apparently, fanaticism takes root more strongly among men. The law, as usual, is the last to know, [Read more]
The majority of people in this country do not agree with the legality of same-sex marriage. Same-sex marriage is considered a form of deviation from moral and religious norms.