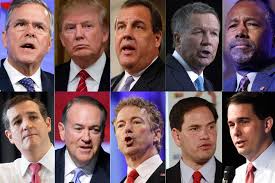 There is something particularly rotten about 2015: a different type of insolence, an astonishing and, indeed, new lack of modesty.
Trump’s seemingly limitless belligerence has charmed the Americans even more than his plan to seal off the United States from Latin America with a wall.
<i>Donald Trump's jump-start as the Republican presidential candidate seems to have come to an end. The tough and popular real estate mogul and hero of many a talk show has snubbed U.S. citizens.</i> First, he had a go at the Mexicans; now, it's U.S. Senator John McCain's turn. Despite all his verbal escapades, [Read more]

With a year and a half to go until the elections, there is every chance that a lot of noise is being made over nothing.
<i>First the real estate tycoon attacked Mexican immigrants, now the war hero John McCain is under attack. Donald Trump is not taken seriously, but the billionaire is still ahead in many polls.</i> Donald Trump is leading a USA Today poll of Republican candidates by three percentage points. On Sunday, Trump was the [Read more]

<b>The head of the American Senate Armed Services Committee, John McCain, promised his personal involvement in the abolishment of the visa requirement for Poles wishing to travel to the U.S. He announced that adequate changes regarding the matter will be passed on for enactment in next year’s defense budget.</b> [Read more]
Having reached the age limit, Lindsey Graham announced on May 28 his departure from the U.S. Air Force Reserves, where he had obtained the rank of colonel. On June 1, the South Carolina senator declared his candidacy for the Republican nomination for the 2016 presidential election, counting on his years of service on [Read more]

When we see the renewal of the PLO, we will know that there is a new strategy.

No one has any doubts that a new military catastrophe will involve more than just Ukraine and Europe.
The United States and Germany agreed on toughening the sanctions imposed on Russia in case Moscow does not stop the aggression against Ukraine. However, President Obama declaimed the delivery of lethal weapons from the U.S. to the Ukrainian army as only a possible option. During a press conference organized in [Read more]
« 1 … 4 5 6 7 »