state of the union address

Far from offering a farewell speech before Congress, with a self-indulgent recount of his achievements, the president talked about the great challenges of the United States. 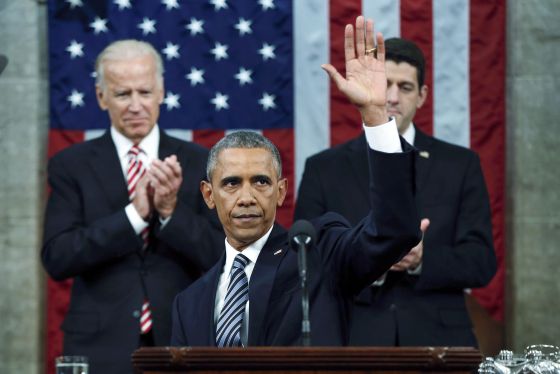 Yesterday at dawn, Barack Obama hit the nail on the head by turning his last State of the Union speech — the most solemn speech that U.S. presidents give annually before Congress — into a plea in favor of hope and facing the future without fear. The insistent and alarming message the electorate is being [Read more] The president's rivals did everything they could to throw a wrench in his plans, and today dream of cutting his legacy to pieces.
The absence of political dialogue has become a chronic illness in the U.S. that paralyzes democratic practice – an illness for which a remedy will probably not be found any time soon.
President Barack Obama announced his plans to strengthen the middle class by raising taxes on the rich on Jan. 20 (local time). During the live broadcast of the State of the Union, he revealed the direction he will take for the remaining two years of his presidency, striking the Republican-controlled House and Senate [Read more]
The principal indicator of poverty and inequality in Europe — and more so in Spain — is the number [of people] out of work. Therefore, it is very thought-provoking to analyze the paradox that the U.S. has become one of the most unequal societies in the world, and at the same time is at the point of achieving full [Read more]
Once more, the U.S. president appeared before Congress to present the State of the Union address. Unlike the previous five years, lawmakers belonging to the Republican Party hold the majority in both chambers of Congress. This new balance of power does not seem to have affected the president, and in his speech, he got [Read more]
<i>In his sixth State of the Union speech, Obama challenged Congress to raise taxes for the wealthiest as well as demand the use of force against the Islamic State.</i> This could have been the most difficult State of the Union speech Obama has ever had to make. In fact, it was the most combative and optimistic [Read more]