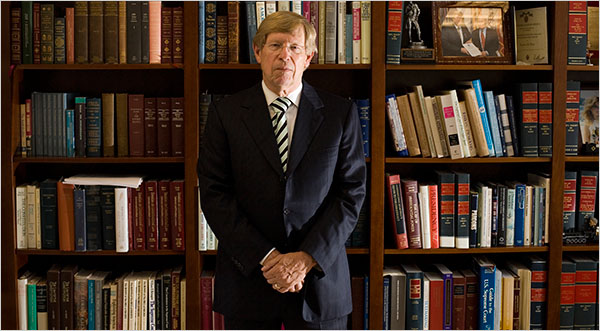 Theodore Olson is actually a conservative hard-liner, a Republican who supports the right of every American to own a gun and as U.S. Solicitor General defended George W. Bush’s controversial legal opinions concerning the so-called “war on terror.” He’s mainly known for representing George W. Bush before the Supreme Court after the 2000 presidential election and successfully getting him into the White House. But Olson is now attracting attention with what is known essentially as a Democratic issue: he is preparing a brief proposing a law he hopes to get through the Supreme Court that would allow same-sex marriages nationwide in the United States.

In 2003, Olson did not support preferences for minority students under equal opportunity provisions. He sees no conflict between his position there and his current support for gay marriage; on the contrary, he says it’s a logical continuation of his fight against discrimination. In the one case, it’s a matter of negative discrimination, and in the other it’s positive discrimination. Olson adds: “This is about the an individual’s right to be treated fairly and not stigmatized.”

The bone of contention here was the state of California. Voters in a referendum there chose to reverse an earlier state supreme court ruling legalizing same-sex marriage. Olson decided to make a constitutional case out of it at the federal level. “It’s a question that needs to be addressed at the national level,” he said.

Olson allied himself with former adversaries from the 2000 election: David Boles represented Al Gore at that time. Teaming up with him, Olson says it will be a signal that this isn’t about liberals versus conservatives, but rather about constitutional rights and equal justice for all Americans.

But Olson is trusted neither by Republicans nor Democrats. Some find it especially suspect that he has no close relationship with homosexual issues. He is currently in his fourth marriage and has no known gay relatives.