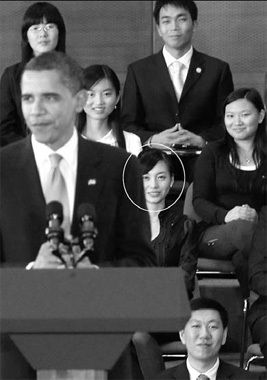 The China Times reported that a female student, wearing a black coat and standing directly behind President Obama during his lecture mid-November at the Shanghai Science Museum, became an overnight sensation on the internet because of her beauty and “the coat taking-off incident.” However, it has become apparent that the whole thing was a fraud. The girl actually spent 200,000 Yuan to create a media buzz in order to become famous and break into show biz.

The so-called “girl in black behind Obama,” Zifei Wong, is a graduate student at Shanghai Jiao Tong University. According to publicity professionals, her overnight sensation smacks of manufactured celebrity. An internet designer who calls himself “The Second Place” told the Wuhan Morning News that, after consulting friends, he realized the whole thing was carefully schemed.

The author of this whole fraud was Zifei Wong’s boyfriend, a businessman. He paid 100,000 Yuan for a Beijing internet designer to help make his girlfriend famous so she could break into show business and used the opportunity of President Obama’s lecture at the Shanghai Science Museum to launch the scheme. He said Zifei Wong didn’t take her coat off before the speech, as claimed on her blog, but during the speech.

The publicity the “coat taking-off incident” attracted was unusual. A professional photographer wouldn’t be distracted by a girl who takes off her coat while the president is giving a lecture in front, let alone shoot the whole process and post the photos on the internet. Seen from a professional perspective, this is actually the first step in an internet propaganda campaign, using the removal of her coat as the “explosion point.” In addition to the initial 100,000 Yuan the girl’s boyfriend paid, another 100,000 Yuan was offered to have the company arrange for Zifei Wong to have the best spot for the shooting.

Three Stages to Set Up the Fraud

After taking off her coat, the next thing to do is draw the audience’s attention. In professional jargon this is called the “developing point” and is meant to play up the event to the media. “The Second Place” said that, in order to keep the news hot, the schemers went immediately to the third stage, the “prolonging point.” For this stage, Zifei Wong interacted with readers on her blog, explaining that her action was by no means an attempt to get into show business. This both confused and intrigued readers, making the event all the more fascinating.

“The Second Place” said, “the design company behind the curtain made 200,000 Yuan from this but the actual cost was strictly controlled at around 5000 Yuan.” Hence, in just in a few days, this company made a surprisingly high gross profit. This is no doubt a catalyst to the scheming market – just in the last year, 5000 similar companies were founded in Beijing. In fact, quite a few business managers pay for design companies, with fees ranging from 200,000-700,000 Yuan in order to get the celebrity effect. The book “The Happiest Jobs,” which caused quite a buzz on the internet, demonstrates this point.

Scholars are Concerned that Internet Sensationalism May Bring Danger

A recent report quotes “Linyrr”(pseudonym), the manager of a noted internet community, who stated that the people running online marketing companies were all once senior members of a certain BBS [an internet-based Bulletin Board System], who understand the cycles of internet sensationalism and how to promote it.

“The Second Place” said it’s easy to be a super star, explaining, “if you have good appearances, a lot of money and good stress-endurance, we can amplify your personality, draw media attention and make you famous.” But scholars worry that internet sensationalism may threaten the stability of society. Hence, the government should take quick legal action to monitor these internet activities and put an end to these contagions.