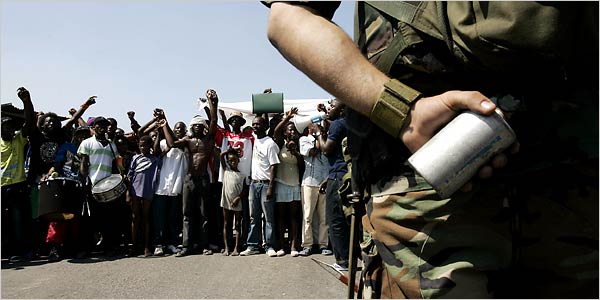 The American soldiers who went ashore after the devastating earthquake in Haiti set foot upon known terrain. For the third time since the independence of the former French colony, Washington is trying to settle affairs in this country plagued by so much disaster.

Of course there is a difference between relief work after an earthquake and a political intervention. The American aid is more than welcome, especially since the UN force, which was already present in Haiti, has itself been affected by the earthquake. As soon as work transitions from clearing debris to reconstruction, the questions of whether and when the Haitian government is capable of taking back control will automatically arise. No matter how much Mr. Clinton emphasizes that the Americans want to position themselves as partners and not as patrons, the inequality of power remains. That the Americans’ arrival was met with cheers by many Haitians said much about the people’s confidence in their own government. It will not make it easier for the Americans to leave again quickly. The first time the U.S. occupied Haiti, troops only left after roughly 20 years, though with few apparent achievements.

When setting up an aid organization is concerned, the American army is difficult to outmatch. However, the reconstruction of Haiti, administratively speaking, does demand different qualities. The history of Central America offers numerous examples of American interventions that eventually brought next to no change.

Is it a coincidence the only black republic in Latin America has fallen so much behind? That the slaves who were inspired during their rebellion against the French plantation owners by the French Revolution could not disguise the fact that the new state was rooted more in African than European culture? The bloody settlement with the remaining whites robbed the country of much knowledge and experience. The former, mainly uneducated slaves, knew how to work the land, but lacked experience in leading a plantation, let alone a country.

They could not count on support and sympathy from outside, not even from the United States. Even though the U.S. had only recently thrown off its colonial yoke, that was driven by the descendants of the original colonizers. They kept slaves themselves and feared the precedent set by the Haitian rebellion. Only in 1862, the year in which President Lincoln announced the abolition of slavery, did the U.S. enter into diplomatic relations with Haiti.

By 1823, the U.S. had already laid the political foundations for its later intensive meddling with their “backyard.” President Monroe warned the former colonial powers that year not to interfere with the recently independent republics in Latin America. In practice, the Monroe Doctrine also acted as a license for the U.S. to settle affairs at its own discretion. In Haiti, that happened for the first time in 1915. The country had by then already experienced dozens of coups, but only when the interests of American companies on the island suffered did President Wilson decide he had had enough. The marines he sent to Port-au-Prince would stay nearly 20 years. During that time, an attempt was made to modernize the country – the population was forced to build roads as part of this effort. When the Americans finally abandoned the field in 1934, Haiti quickly fell back into old habits.

Haiti was not the only country that had to tolerate the “aid” of the Americans. During the same period in which the American marines took control over Haiti, Nicaragua and the Dominican Republic were occupied as well. Cuba, after the expulsion of the Spanish, was little more than an American protectorate. Panama, originally a Colombian province, was made “independent” by Washington, for the sole purpose of digging the canal.

Whatever the current situation of these countries, in all cases the Americans’ meddling has had more of a negative than a positive effect. The second American occupation of Haiti in 1994 was no exception, no matter how much the invasion was welcomed at that time.

The lamentation of many Haitians that only foreign interference offers hope for change may be explainable from the proven inability of their own politicians. If they really want to be independent, that change will have to come from themselves.