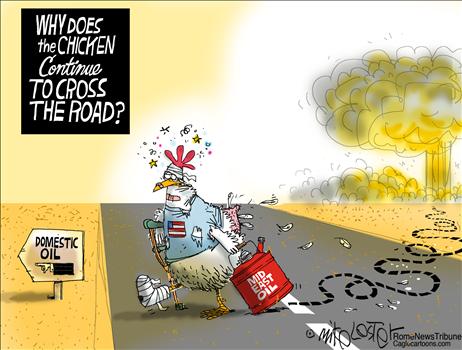 Official estimates, announced by President Barack Obama, are that America will most likely become an exporter of energy, in the form of gas and oil, by 2015. After this date, it will not import these two commodities from either the international market in general, or the Arab market in particular. This energy coup will turn the United States’ policies in our region upside down. It will transform our region into an area of marginal interest and importance to Washington’s international strategies. America may even liquidate its presence in and around the area because its self-sufficiency in energy will free it from its need to maintain a sizable military and diplomatic presence in our Arab countries. It will bring about changes in priorities, friendships and rivalries as Washington turns toward other regions of the world. No doubt the Pacific Ocean and its vast area, rich with trade and interlocking benefits, will become the certain alternative to our own region.

Our region, on the other hand, is heading into an era of darkness reminiscent of that which it knew after the discovery of the Cape of Good Hope, but before the Suez Canal was carved, which secluded it far from international trade routes and caused it to be struck by a wave of poverty. With that, the population size of the region fell by a tangible amount; this, in turn, caused agriculture and industry to collapse. The role of the region in civilization and politics declined to the extent that it entered, in terms of economics and strategic significance, a dark night that it hasn’t fully arisen from even today.

In my view, this prophecy, by which numerous experts predict that America will reach energy-independence and become an exporter of oil and gas, will not be realized for many reasons. I have summarized the most important ones below:

*The Arab world’s strategic position between the world’s continents and its proximity to the avenues of accessing the Pacific Ocean, with its strategic sea corridors that are important to all international trade and its lines for transporting oil to the different regions of the world.

*The enormous size of the financial resources of the Arab oil-producing states, which currently play and will continue to play a definitive role in the stability of the world economy in general. They play an important role in America’s economy, in particular, because of the country’s increasing foreign debt, its need for capital and the fact that its economy is based, in large part, on foreign resources that must remain under its control or otherwise within reach. This means that America must be ready to acquire them using all means, including military action; this will force Washington to keep its forces close to these resources.

*The form of the international system, which is based upon defending America’s unipolar hegemony, in terms of both security and economics, over most of the world’s strategic regions, as well as a Yankee presence spread over most vital nexuses, whether on land, in the air or in the sea. This hegemony requires clear, visible control over the open ocean and the areas connecting and dividing the large energy deposits in the Arab world and the Islamic regions of the former Soviet Union. It also requires establishing comprehensive, integrated security systems that can contain actual and potential dangers and respond quickly to anything that shakes the stability of Washington’s control over vast areas of the globe, which includes measures taken by resource-owning countries whose independence affects America’s extensive global power.

This dimension of hegemony won’t decrease in importance as a result of the discovery of American oil. Rather, it will increase in importance. [Energy independence] will not encourage Washington to restrict its ability to intervene anywhere or hold onto its presence in the key strategic nexuses of the world, found between Central and Eastern Europe and Russia, between Russia and China and between China and the rest of the East Asian countries. Instead, it necessitates the presence of significant American power in the Balkans, Turkey, Iraq and the Islamic republics that separated from the former Soviet Union, extending all the way to Afghanistan. It also necessitates keeping the Iranian regime away from the expansion of America’s presence in this area. Since the 1990s, America has achieved the impossible by occupying a key influential position in the area due to the rise of Israel therein and its direct role in determining the area’s fate; this is facilitated by the conflicts America and Israel enter into, which are aimed at subjugating the region in the mud of international rivalry.

*The form of the international economy, which is based upon open trade and the same resources that are available without any restriction to America, and its strategic, political and military importance that stems from two-century-old policies. These policies ensure that America’s international influence is tied to the form of international trade, which must be open and free of any national protections and restrictions imposed by other countries.

Anyone who contemplates the growth and development of China will see how much it has led to the growth of international trade and the increase of the quantitative and qualitative difference between America and other countries, as well as how much America has been aided by the advance of the Pacific Ocean to the forefront of international exchange of commodities and capital.

America, as the first beneficiary from any growth or advancement that occurs in any place, diffuses a network of arbitrary relationships that contains active points of gravity that prevent anyone from leaving its circle of interests. America can’t remove Arab oil from that circle because it is a commercial material that brings capital, influences the status of its owners in all international relationships, and grants them some amount of independence in their desires and decision making. For America, none of these things are permissible — they are red lines that no one is allowed to approach, let alone cross.

*The diverse and ramified international competition over the Arabs’ wealth and oil that will inevitably break out if America steps away from those resources, as well as the change in the global economic power relationships and their focal points that would follow. Let’s imagine that China secures most of the Arab oil and money. What effect would that have on China’s role in the global economy, and how much would that help it to occupy the top position? It is estimated today that it will take between 30 and 50 years for China to reach the top position. During that time, the American economy will remain the biggest economy in the world.

These are some of the factors that are very likely to limit America’s energy independence from Arab oil, and which go beyond the issue of oil. We must not look at America’s future relationships with the Arab world in light of the oil issue alone. Those relationships are too complicated and ramified to be explained just through oil.

The aforementioned points do not mean that we should ignore the effects that America’s entry into the international market as an oil exporter will have. Nor should we ignore the circumstances and complications that will result. Given the importance of energy and energy revenue to both the stability of our countries and the growth of our societies, these things must be subjected to expert studies and specialized conferences that will uncover the hidden ramifications of this highly important development, lest we be surprised by the unexpected and unwanted and commit errors that would, no doubt, be very critical this time around!